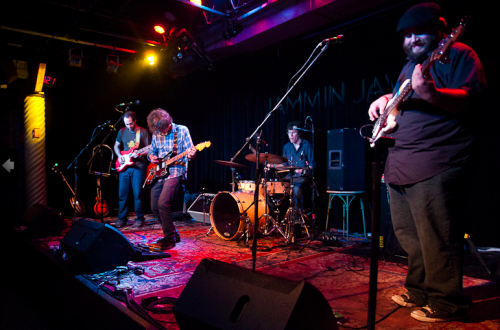 R: Your name is quite unique. How did you choose it?

NR: We named the band after a feral cat that used to show up on Sean’s back porch. The old lady next door kept yelling at the cat calling it “Norman Rockwell”. This feral cat represents our collective consciousness and determination to survive within the music industry.

R: There’s a good amount of classic rock meets folk to your sound. Who would you say are your biggest influences both as individual band members and as a group?

All- Bob Petty (Our Collective Idol)

R: Your live show, when compared to your recorded material, sounds as if they’re nearly one in the same (in a good way). What are the biggest differences you’ve encountered while transitioning between your live show and making your new album?

NR: We started to record the album early on as a band, over the course of a year, so the songs weren’t as developed as they are currently. Over the span of a year, we have tried to play those songs as accurately as they sound on the record. Due to time and variation in venues, the songs have sometimes been adapted to suite the room, or reflect where we were musically at that point.

R: This is your first full-length release together. Your fans had a big hand in this release what with helping you achieve your project goal via IndieGoGo. Talk a little bit about your experience with IndieGoGo and the laborious process of putting out an independent album. What was the hardest part and what are you most thankful for?

NR: The IndieGoGo experience helped us realize how many people were willing to come together to make this happen for us. The hardest part is actually asking your friends for money as opposed to just asking them to come to shows. We are so thankful for all of the support that we received in the end.

R: The independent music “industry” appears to be the route many musicians are taking these days. What do you feel are the benefits and hardships encountered as a result of this?

R: What is your ultimate goal as a band?

NR: To write the best music we possibly can and hopefully make a living doing so.

R: If you could share a bill with any artist dead or alive who would it be and why?

NR: Bob Petty. He is our collective idol!

R: If you could tell the greater D.C. area why they should attend your record release party at Jammin’ Java on October 20 what would you tell them?

NR: This is the culmination of a year’s worth of hard work, help from our friends/family, and a journey in refining our sound. We are really excited and proud to release our debut album!

We have done everything within our means to make sure that our album release party will be totally super awesome sunshine fun time, filled with unicorns and moon sugar that span the greater universal truth that we believe can be found within our album.

Norman Rockwell’s CD release show is at Jammin’ Java on Saturday October 20 at 8:00 p.m. Tickets are $15. The Family Plots and Jayme Salviati are also scheduled to perform. Doors open at 7:00 p.m.