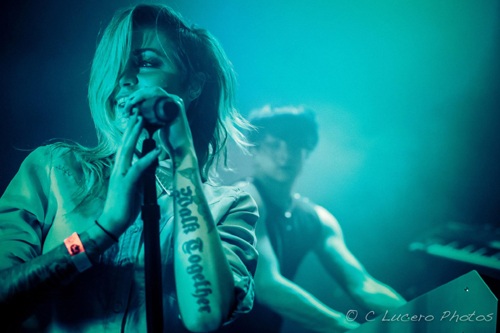 The Shiny Toy Guns rode into DC Sunday night on soaring symphonic sounds and pulsating waves of light that dazzled a sold-out crowd of very enthusiastic admirers at the Rock and Roll Hotel.

Actually, the Shinys literally rode into town in a tour bus dragging a trailer packed full of supplies for victims of Hurricane Sandy in Hoboken, NJ, where they were headed not only to donate those supplies but offer a cadre of fans a lift across the river to a Monday night show in Manhattan. And that’s part of the appeal of this four-member band, which was celebrating the return of original singer Carah Faye Charnow — they are such genuine folks despite their love of glam glitz and big gothy boots.

Carah Faye does more than sing damn well — she trades off on synths and bass with Jeremy Dawson, keyboardist, bassist and all-around mastermind. Carah was away for the band’s second album but now she’s back for their third, III, and the chemistry between her and the rest of the band was superb. Besides jumping onto the keyboards when Dawson rotated off, she meshed very well with her fellow vocalist Chad Petree, who also mesmerizes on the guitar. Drummer Mikey Martin, of course, ably supported all three of his band mates with delightfully glam percussion.

From the opening number “Wait for Me,” the Shiny Toy Guns demonstrated they were indeed back together and perhaps better than ever. Dawson kicked off a rising cascade of synths to open the song culled from the new album. Soon, Carah and Petree are trading off singing duties, demonstrating one of the biggest strengths of this band — the twin power of complementary male and female vocals. The two singers bring a lot of versatility to the band and occasionally some unexpected depth when they back each other up.

If “Wait for Me” was unfamiliar to the crowd, they didn’t show it and the Shiny Toy Guns moved immediately into crowd-pleaser “Rainy Monday” from their first album. But it was the third album songs that really shined. They are a lovely mix of 11 songs that range from melancholy ballads to fun declarations of independence. I found a new favorite in “Speaking Japanese,” a fanciful dance number basically telling someone to get lost. The song bridges Missing Persons and Robyn, and should definitely convert all fans of the latter if they give it a listen.

Another terrific new song is the slow “Fading Listening,” a song evoking falling into love with another as you listen to them. It unexpectedly had a slightly different sound than a lot of other songs by Shiny Toy Guns, accentuating a sweet almost neo-soulful mix of voice and instruments. (It totally reminds you that the band once covered Prince’s “Nothing Compares to You” and did a good job with it.) Both new songs really highlight spritely Carah’s vibrant pitch. She even wins me over with “Ricochet!”, which I found to be a screechy abrasive song from their second album, Season of Poison, turning it into a surprisingly bright rave song. I’m not the only one that’s pleased — random proclamations of “We love you, Carah!” erupt from the audience occasionally to punctuate how happy everybody is that she’s back. 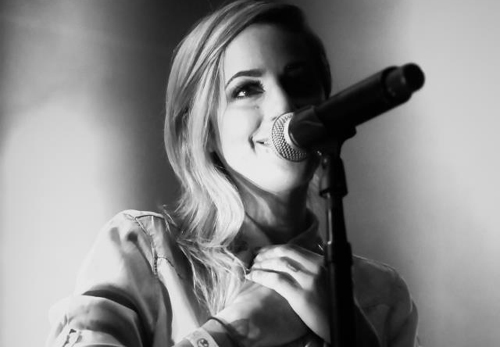 Part of the fun of Shiny Toy Guns is that they are not afraid to explore their influences and their passionate cover of “Stripped” by Depeche Mode proved to be a crowd favorite. Everyone truly jumped into frenzied dancing, however, when the band opened its encore with their cover of Peter Schilling’s “Major Tom,” which they totally owned with such buoyant panache that you could be forgiven for calling theirs the definitive version.

Like a great deal many other bands, the guys in the band aren’t ever terribly enthusiastic to being pegged to one “flavor” of music, but at their best the Shiny Toy Guns showcase the strengths of new wave, meshing sound and vision into a wildly entertaining performance. In years past, I had a few opportunities to bar hop with the gents and talk of bands like Depeche Mode or David Bowie or even ‘Til Tuesday and the Outfield come fast and furious. The Shinys know how to put together a song in the vein of the sounds they love without simply rehashing them.

The Shiny Toy Guns closed out their US tour with that date in New York on Monday night, soon to embark on a tour around the world. But the reunited quartet most certainly warrant your attention when they come back around. And I certainly think they will be here again in the not too distant future at a bigger venue.

Photos of the Shiny Toy Guns from tour stop at the Rickshaw Stop in San Francisco, Calif., on Oct. 22, 2012, by CJ Lucero. Thanks to CJ Lucero for permission to use his pix. Check out more of his photography at www.clucerophotos.com.