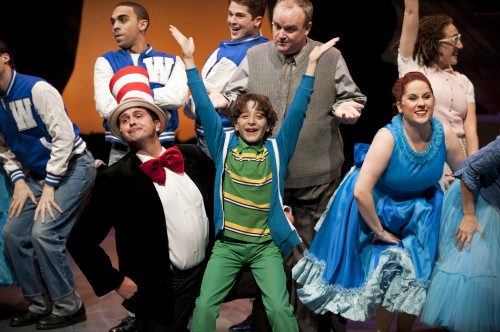 Attending a performance of Imagination Stage’s Seussical marked a new milestone in my career as a pretend theatre critic (I say pretend because I’m no Peter Marks… yet.) It was the first show where I could say that the majority of the audience were younger than me. Much younger. Usually it is the other way around. That’s the norm when it comes to Children’s Theatre. 12 years later from it’s original Broadway debut, the musical based on the works of Dr. Seuss continues to delight crowds wherever it’s produced thanks to Seuss’ continued purveyance in Children’s literature.

Imagination Stage brings Seuss’ world to life in a way that’s sure to engage even today’s digital age youngsters. With the holidays in full swing, Seussical is the perfect answer for families looking for a wholesome entertainment experience this winter.

Much of the plot of the show is based from  Horton Hears a Who!, originally written in 1954 yet still ranks on the top of the charts on Amazon.com. The show opens in the Jungle of Nool where Horton the elephant (Matthew A. Anderson) comes across a speck of dust that is home to an entire  population of “Whos.” In Horton’s mission of keeping his newly found friends safe he encounters other characters from Seuss’ stories with the most notable being the Cat in the Hat (Jamie Smithson). Smithson’s character dons the iconic red and white striped hat, but Director Janet Stanford and Costume Designer Frank Labovitz gives this production a more doo-wop feel with the rest of the cast dressed up in varsity jackets and poodle skirts. Acting as Narrator and MC, the Cat in the Hat takes a young Whoville child (Simon Diesenhaus and Svea Johnson in a shared role) on a journey that brings out the creative spirit and imagination that the late Seuss encouraged all of us to embrace. Johnson really shines and displays one of the best performances I’ve ever seen in a child actor.

Among the adult ensemble, a few actors caught my eye, Anderson elicits smiles and laughs as Horton. Shayna Blass as Gertrude McFuzz, is absolutely adorable as she vies for Horton’s attention. Also in the mix is Mayzie LaBird (Kirstin Riegler), who throws a curveball in Horton’s adventures when she leaves him with an egg he must take care of.

Besides cute songs and dance, the show offers many chances for the audience to get involved. Expect props to be launched into the audience via air-cannon and sing-along moments during musical numbers. It all adds up to a solid show that any family should to add to their December calendar.