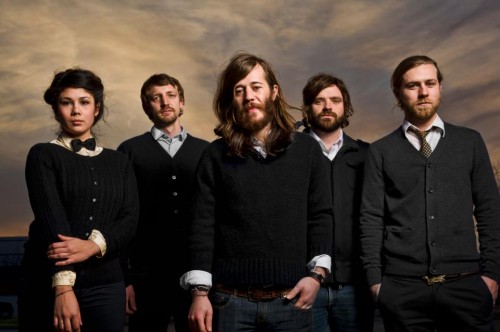 My first exposure to Oklahoma’s Other Lives was at this year’s Coachella music festival. I had never heard them before, but had heard the name, and decided to check them out. I was blown away. The five-piece band’s sound is orchestral and lush, blending dreamy, melancholic vocals with beautiful and unconventional instrumental arrangements. Earlier in the year they spent some time opening for Radiohead on tour in the US and Mexico, and are now on their own US tour supporting their latest album, Tamer Animals- a gorgeous, dark, musical fantasy. They play DC’s Rock & Roll Hotel this Friday, November 30th. I recently got the chance to talk with singer Jesse Tabish, and here’s what he had to say.

Jesse Tabish: Really nice! We’re about halfway through, and we’re headed to Austin right now, so I can’t complain. It’s been very nice.

Alexia: Cool! So how did you first start playing music?

Jesse: Well I started very young, playing the piano, maybe four or five, and you know played music my whole life. Picked up the guitar when I heard Nirvana, just like many kids, and I’ve been writing music for the last fifteen years. That’s kind of all I’ve ever done, from when I was little.

Alexia: So you mentioned Nirvana, who I love- was there any one artist or album that made you fall in love with rock?

Jesse: Oh yeah, I remember one Christmas, when I was very young, my parents got me a little single of “Hey Jude” on a tape. And I remember it was the first time I was really truly taken aback by something, and I listened to that the whole day. I probably listened to that song forty times, just on repeat and repeat and repeat. It was kind of the first moment I was like “Wow!”, really powerful.

Alexia: So do you feel like there’s a scene where you all are from?

Jesse: You know, it’s like an anti-scene, really. We’ve been doing music in Oklahoma for the last ten years, and I say anti in the sense that there’s no collective sound of bands. Which I think is really fantastic. Oklahoma’s a little bit of a lonely place- there’s not a whole lot of things coming in and out of it. In some ways it has this feel of isolation to it, and I think, you know, it can leave artists to kind of have that meditation and to be and grow individually from that, rather than sometimes you get too much of a scene, you get too many bands that are influencing each other too much. But in Oklahoma it’s kind of the opposite. 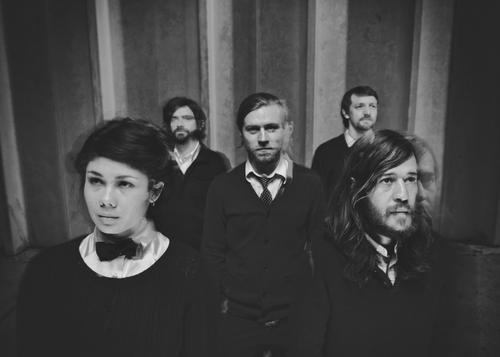 Alexia: Do you feel like there’s still a creative community though?

Jesse: Completely! Yeah, there’s no lack of creative people, that’s for sure, it’s just that everybody’s kind of doing their own thing, and I think that’s cool.

Alexia: How did Other Lives first come together as a band?

Jesse: Well we just celebrated our ten-year anniversary in Los Angeles. So we started as an instrumental project, and it grew from there. We were a band called Kunek, we released a record, and we split ways with another member, and so decided that we wanted to kind of change directions, so yeah. We’ve been friends and family and a band for about ten years now.

Alexia: So I got to see you all at Coachella this year, and I had never heard your music before, and I was just totally captivated and blown away! It was one of my favorite sets of the whole festival.

Jesse: Wow, thank you very much!

Alexia: It was mesmerizing. What was the whole Coachella experience like for you all?

Jesse: You know, I like it, but I prefer smaller festivals a little bit. It was great to play it, and it was great exposure, but I tend to play the festival and then go hide because there’s too many people for me. But Coachella was great because you know, the idea that people can walk up to your show and might not know who you are, and you can gain a lot of new fans that way, so I appreciate that.

Alexia: Did you get to see any of the other acts, or were there any moments for you that were cool?

Jesse: We were on tour with Radiohead at the time, so we went and saw Radiohead again. (laughs)

Alexia: That was an amazing set as well!

Jesse: Yeah, they were fantastic.

Alexia: So speaking of them (Radiohead)- were you all fans of them before you went on tour with them?

Jesse: Of course! I mean, they truly influenced this band, and we’ve been fans of them ever since The Bends came out! They’ve kind of been like The Beatles to us, in some ways, so to have the opportunity to be on tour with them was such an honor. We had a blast- they’re great people. The whole thing was just pretty dreamy. It was so much fun. 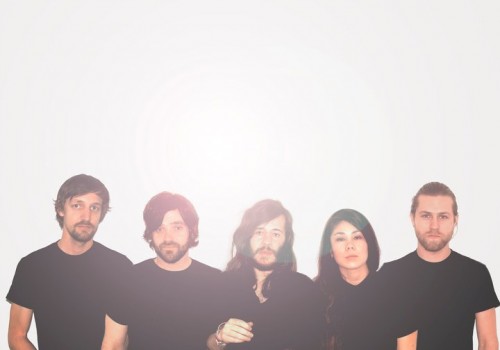 Alexia: That’s so cool! I feel the same way about Radiohead, but wasn’t sure how you all felt.

Jesse: Well yeah! And you know, you can hear it in our music- it is an influence for me, and I’m not ashamed to say it at all. They’re like our childhood music, in some ways, those real formative years of listening to music between sixteen to twenty-one, those years kind of stick in your mind forever.

Alexia: Absolutely! So, there are five of you, and when I saw you I was kind of blown away by how many instruments you all were playing!

Alexia: So how does that come together when you’re writing music?

Jesse: Well it starts with the writing first, and you know, you see all the instruments on stage, and it’s not for show, we’re just trying to follow what the instrumentation is on the record. Usually a song is written, and then it goes in the studio, and we kind of figure it out from there…

Alexia: Do you all write together, or is there one of you who’s primarily writing?

Jesse: Well I primarily write the songs, and then arrangement is more collaborative. But every song is different in how we get through the process of it. There’s not particularly one way we do things, but that seems to be the most.

Alexia: So for someone who’s never seen you play before, can you say what they could expect to see onstage?

Jesse: Well it’s kind of high-energy in the sense that it’s a very active show, and we like to think of ourselves as more of a unit, and ensemble, at least mimicking that in some ways, than a traditional rock act. So there’s a lot of movement onstage, and if they know the record I think it’s even an enhancement on the record.

Alexia: But tell us what instruments are you playing? Because I felt like you each had seven arms when I saw you play, like you were each playing five different instruments per song…

Alexia: That’s so awesome! I don’t know how you’re going to fit onstage in DC, but I’m very interested to see how that works out.

Jesse: Well it’s amazing- it seems like we can fit anywhere. We’ve played on very small stages, so we like the challenge.

Alexia: So I hear you’re working on a new album?

Jesse: This is right, yeah.

Alexia: Is there anything you’d care to share about it?

Jesse: I think in January we’re going to be done. I will say it’s a lot more rapid, and more percussive. But you know, with Tamer Animals we kind of built a palette, so to speak, to work off of.  So we don’t want to repeat ourselves, but there’s the palette of language to kind of work from, so we’ll be working from that, but also from the last two years of new experiences, travel, and new music.

Jesse: Well, right now I’m kind of on a “no music” kick, and just reading, and thinking a lot in my own head.

Alexia: So what are you reading?

Jesse: I just read a really great book called Other Voices, Other Rooms, Capote’s first book. It was great! I couldn’t put it down.

Alexia: I really appreciate you taking the time to talk with me, and I can’t wait to see your show in DC!

Jesse: Thank you so much! Come and say hello!