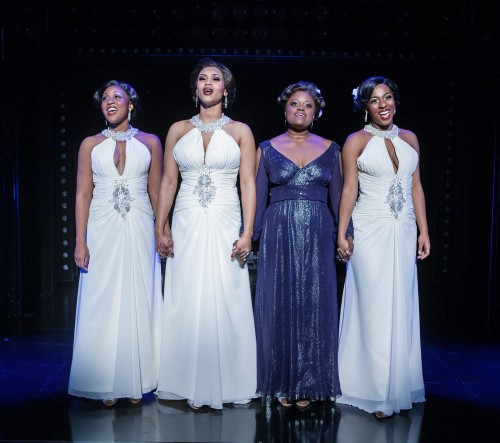 2012 has been a good year for Nova Y. Payton. Payton made a splash this time last year in Signature Theatre’s Hairspray, which netted her a Helen Hayes award in April. After Hairspray, Payton became a Signature fixture with roles in Xanadu and The Best Little Whorehouse in Texas. Now she’s ending the year on a note as high as the one she rode last winter. Payton is quickly becoming a hot name on the DC Theatre scene and her performance as Effie in Signature Theatre’s production of Dreamgirls will be one we will not forget come awards season. With a talented ensemble led by Payton, Dreamgirls will dazzle you with striking moments of a musical era of big hair, sparkling outfits, and skinny ties.

The 1982 Tony winner for Best Musical features  music by Henry Krieger and lyrics by Tom Eyen. More recently, the musical was adapted into a motion picture in 2006 with Jennifer Hudson winning an Academy Award for her performance as Effie. The show chronicles the rise and fall of R&B and Motown artists of the 1960s and 70s with a special focus around a female-trio called, The Dreamettes. The similarities between the show’s Dreammettes (who eventually become The Dreams) and real world group The Supremes cannot be denied with Dreamettes’ Deena Jones (Shayla Simmons) and Effie White holding many similarities to The Supreme’s Diana Ross and Florence Ballard. However the themes of a musical group’s transformation after attaining fame still hold true today. You could replace the Supremes with Destiny’s Child in this comparison and produce the same results. Isn’t it interesting how little show business aspirations and journeys have changed? Still we hear of figureheads of bands going solo, romantic connections developing between band mates, and iconic artists fade gracefully (or not so gracefully) as time marches on.

As the Dreamettes’ most talented vocalist, Payton not only hits every note on the head but delivers it with a power that shakes every beam of Signature’s Max Theatre. She strikes her first blow with “And I Am Telling You I’m Not Going” towards the end of the first act and delivers a second act one-two punch with “One Night Only.” You cannot take your eyes off of Payton when her voice is on display- she’s that good.

Of course the same could also be said about Cedric Neal in the role of Jimmy Early, a star whose light is fading during the rise of the Dreamettes/Dreams. As Early, Neal brings a bravado, energy, and charm reminiscent of Chris Tucker in The Fifth Element. Neal has the power to make audiences weak in the knees with just a single word (which happens to be “baby” and “driving.”) The talents of the rest of the ensemble are nothing short of harmonious from the previously mentioned Simmons to David Bazemore as Effie’s brother C.C. Each character gets a moment to shine and when they do it is nothing short of magical.

The set design by Adam Koch involves a two level stage complete with an elevating center platform that gets plenty of use. Lighting designer Chris Lee must have used every light bulb in town to create a lighting grid that has a very Chicago-esque feel to it. Besides the set, Lee carves beautiful images out of light during scenes where the viewpoint is behind the stage. Frank Labovitz deserves praise for not only his time period styles, but for orchestrating on-stage quick-changes that are done within a blink of an eye. They certainly add a degree of showmanship that was reminiscent of the time. Director and Choreographer Matthew Gardiner re-creates the iconic Motown moves of the 60s/70s while also infusing his own style into numbers like “Steppin’ to the Bad Side” which has a more modern Michael Jackson/boy band pop feel to it.

The only flaw that I found was with the show’s villain Curtis, the Dreamettes manager who has his eye on being on top more than the well-being of his clients. There is nothing wrong musically with Sydney James Harcourt’s performance as Taylor, I just think the character lacked a ruthlessness that could have helped audiences side against him when needed.

Regardless, Dreamgirls is perhaps one of the best musicals of the year and delivers wholeheartedly. It is not only a dream realized for Effie White but for Nova Payton as she becomes a household name on the DC arts scene.