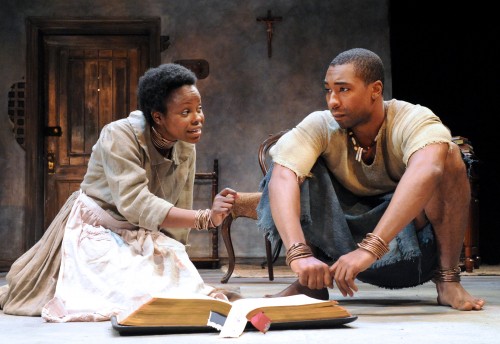 Gurira’s piece is hefty in length, the narrative unfolds over three acts and two intermissions. However it is also does so with a no-nonsense pace that keeps the audience glued to every moment. The show is big but it also delivers big punches, which come mostly from the show’s females.

Gurira set out to not only write a story of her heritage, but one through a strong female voice. In fact the males of the show are often much weaker, especially in the face of adversary. The Chancellor of the town (Alvin Keith), is swarmy and not afraid to turn wherever the tide is turning. Chilford starts as a determined teacher and missionary but quickly deteriorates into a pile of dust at the end.

Alongside Moricette, who delivers a great performance, is Dawn Ursula in a dazzling performance as the Chancellor’s fiancée Prudence. Her character has charm, wit, and wisdom that is beyond the era she lives in. Ursula’s performance sneaks up on you at first, but as the show goes on you cannot notice that she steals scene after scene.

Even Benford as Mai Tamba is entertaining and provides lighter moments as a maid that doesn’t really take Chilford’s work seriously. While she’s not mumbling and forgetting the words to Hail Mary, she’s talking to spirits and hiding pagan idols around the house.

Director Michael John Garces assembles a cast that each hit their roles out of the park, but make no mistake, this is a play where the female roles shine and they do so very brightly.

Misha Kachman’s set features a long runway that extends the action from the stage into the middle of the audience, where Garces isn’t afraid to place key dramatic moments inches away from the audience.

Full of wonderful performances and anchored with a straightforward yet striking narrative, The Convert lives up to Woolly Mammoth’s tradition of shaking things up and leaving the audience thinking at the end. As for Gurira, she is quickly proving her self as a name not just on the screen but on the stage as well.