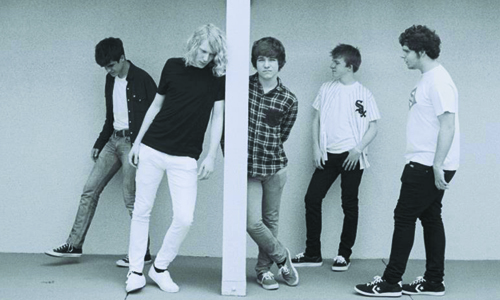 Photo courtesy of The Orwells

Chicago quintet The Orwells perform a cover of The Stooges’ “I Wanna Be Your Dog” in concert.

Sadly, they didn’t play it when they rolled through DC Sunday night with a late show at DC9. The fact that the cover is in their repertoire, however, tells you a lot of what you need to know about these up and coming guys. They like to rock and roll.

Mostly everything about The Orwells suggests early garage and punk bands of the late ‘60s and early ‘70s. Lead singer Mario Cuomo (clearly not the former governor of New York) is a long-haired rocker, literally throwing himself into his songs, shaking his head and body to the beat of the band.

And the band is actually quite professional for its young age (the lads are all around 19 years old). During a break in the music Sunday night, bass player Grant Brinner keeps strumming his bass, providing warm background music while the band recovers from a broken guitar string. (Cuomo good-naturedly admonishes the clean-cut Brinner for his quick thinking. He is a rebel, after all, so screw the background music.) Guitarists Dominic Corso and Matt O’Keefe along with drummer Henry Brinner round out the band.

The Orwells debut album, Remember When, dropped last summer and it includes an impressive 12 raucous songs. More impressive perhaps is that The Orwells have plenty of other material as well. Their show included songs “new” and “old” (they all are relatively new, no?) and they frenetically jammed through them with panache.

The band opened their set with the somewhat slower (in comparison) “In My Bed,” which laments a duplicitous lover. Near the end of the set, they played their catchy breakout tune “Mallrats,” which includes a singalong refrain of “la la la.” The video seems to depict what the band are all about. In it, they goof around in a mall, win a giant teddy bear at the arcade, and then proceed to go to a field and burn the bear.

They played some earlier songs that didn’t make the LP like “Righteous One” and “Southern Comfort” and new songs like “Other Voices.” For such a young band, they have a great deal of material outside of their sole studio album to date, which is very promising. Some of the songs may elicit thoughts of teenage angst or ennui, but The Orwells don’t really get hung up on stuff. These teens just shrug it off and rock out.

The Orwells are heading across the country to play SXSW on March 15. Expectations are they will generate a hell of a lot more buzz after that gig and maybe move on to bigger stages.

Hopefully, they will make it back to DC soon and bring their cover of The Stooges for us fellow Iggy Pop fans.