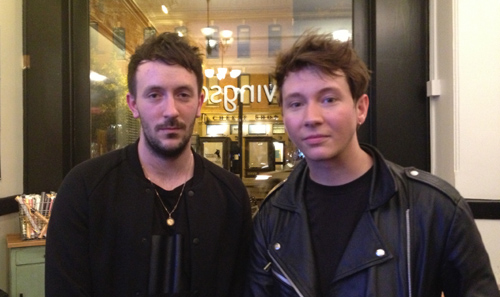 The band were in good form and brought with them a physical CD of five songs being performed on their current tour, which runs through June 2 (although they switch up tour partners from Capital Cities to the Neighborhood when they head to the West Coast).

Lovelife also have just released a new song “Dying to Start Again,” which will be included on a new EP, Stateless, scheduled for release on June 11. This third EP will join their previous two, El Regreso and The Fourth Floor, as free downloads on their website and as a physical release on vinyl, as is the trend with young bands these days.

The jaunty “Dying to Start Again” moves the band a little bit more into neo-psychedelia, which suits them pretty well. The catchy beats and upbeat attitude belie lyrics that sing of a sadness of being separated from yet another lady love. Its buoyancy and wordplay make it perhaps Lovelife’s most accessible song to date, and it could poise them for a much deserved breakout this summer.

Ally Young’s stealthy synths are at their most seductive while Sam Jackson adds some funky guitar and Frank Colucci keeps time with some smooth drumming. I wouldn’t be surprised to learn they were secretly collaborating with Nile Rodgers whenever they were back in New York City. (They’re not, but it would be wholly appropriate.)