After a quick survey of local food options, I was pleased to see the excellent grillmasters of 13th Street Meats doing a great deal of business at a booth provided by Toki Underground. (If business is good for 13th Street Meats now, it undoubtedly will get better when they open their retail storefront, “Meat and Foods,” on Florida Ave NW sometime next year, when I’ll likely buy too many of their delicious half-smokes.) Of course, Sweetgreen and Honest Tea, sponsors of the festival, also were doing well.

We made our way to an area designated as “The Wharf,” where we had lobster rolls from Luke’s Lobster and crabcakes from Rappahannock Oyster Bar. Both are well worth checking out at their usual locations in DC’s Union Market and on E Street NW, respectively!

As we ate, Ohio duo Twenty One Pilots were whipping up the enthusiasm of the crowd at the treehouse stage with their rap rock. After lunch, however, we were absolutely wowed by Haerts, a new quintet with an extremely catchy repertoire. Although based in Brooklyn, its members — Nini Fabi, Ben Gebert, Garrett Ienner, Derek McWilliams and Jonathan Schmidt — hail from Germany, England and the United States, no doubt contributing to textured layers of their dreampop compositions. Fabi’s sweet and soaring voice on numbers like their popular single “Wings” captured the audience somewhere between standing entranced and dancing along.

We also caught a bit of MS MR, featuring the vocals of Lizzy Plapinger, who sounds like out an out-of-time 50s chanteuse with modern spunk, and electro producer Max Hershenow, whose delicate but deliberate music likely would have been waltzes in another era. MS MR release their debut album, “Secondhand Rapture,” today, and it might be your cup of tea if you think Lana Del Rey or Grimes could get a bit more down to earth.

We left the treehouse stage for the main stage and the full spectacle that is the Yeah Yeah Yeahs. With fourth album Mosquito now under their belt, Karen O, Nick Zinner and Brian Chase feel like rock and roll veterans now, having been in the public eye since their very first release. Age has not necessarily been a good thing for the Yeah Yeah Yeahs’ music, however. Karen O spread her wings as a full hipster diva, with outfits garish enough to compete with a young Elton John, and the tunes have become increasingly grunge. New song “Mosquito,” the title track of the new album, lacks the imagination of earlier art-punk offerings like “Y Control,” in my opinion.

But the crowd was pumped up to see the trio and they brought the rock and roll. Karen O energetically yelped and strutted, and she seemed positively pleased to be there. A long intro to “Zero,” which built up to a crescendo, gave her time for a bit of a costume change into a rhinestone leather jacket with her initials on the back. A rather lovely rendition of “Cheated Hearts” inspired O to get down front with her audience and invite them to sing “woooo woooo” into her microphone, which was a nice personal touch. The admiring crowd was excited but orderly and the admired singer honestly seemed deeply appreciative. 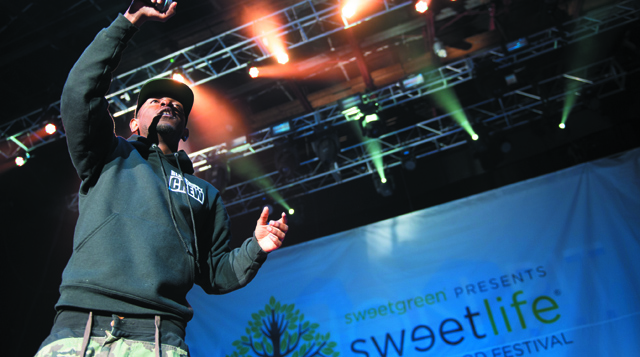 At the suggestion of my concert companion Yasmin, we decided not to gamble with losing rather good seats under the pavilion and instead stay through the performance of rapper Kendrick Lamar rather than check out the treehouse stage or the DJ floor. I wish I could say that decision paid off, but instead I was reintroduced to all of the reasons that I’m not a big fan of rap music.

Let me first say that Lamar is earnest and has a good presence. He’s very talented — he will freestyle rap at the drop of a hat, and he’s a fearless a cappella singer. Lamar appears very connected to his fanbase, and he demonstrated a very flattering humility several times when he thanked the audience for following him and giving him the opportunity to perform. His recurring cheer, “Make some noise for yourself!”, reflects the sort of positivism I like to see in performers.

All of that said, are songs like “P&P” the best we can do? Telling us you enjoy the comforts of “pussy and Patron” does not take a lot of brainpower, skill or smarts. That and quite a few other songs seem like lazy offerings, appealing to escapism of the lowest common denominator. The audience was welcoming of songs like “Poetic Justice,” which sampled Janet Jackson — but sampling and salaciousness seemed to be all that Lamar had to offer at the end of the day. 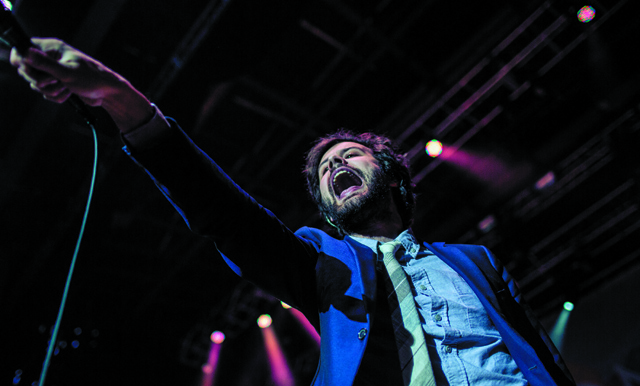 Staying put paid off in good seats for Passion Pit, who perhaps worked harder than any band I had seen all day. Lead singer Michael Angelakos sang his heart out and whipped himself up into quite a sweat by the end of his performance. His four bandmates kept pace with a slew of instruments that included seven synths! The highlight of the performance was the excellent new wavey “Take A Walk” (during which I unfortunately had to take a walk). And the neo-psychedelic “Sleepyhead” pleased my friends and the crowd alike.

The quintet from Cambridge, Mass., has matured rapidly in the course of two albums, and it’s intellectually engaging to listen to them and ponder their lyrics. (One might also just shut up and dance, of course.)

Despite a solid performance, something was still missing for me. I can’t really put my finger on it but while I find the sound of the band aesthetically pleasing, I don’t truly find it all that compelling. I can’t say I would go out and buy Passion Pit’s music, which is always a line I draw for how much I like bands. It’s fine to hear them out in the world, but I cannot be convinced that I have to hear them in my home.

Phoenix closed the day, and by that point the entire festival had settled into the pavilion and grounds of the mainstage. It may have taken Phoenix a very long time to get to headliner status at festivals (they indeed also headlined Coachella last month), but vocalist Thomas Mars and his fellow Frenchmen were not about to let that time go to waste. The band opened with the lead single “Entertainment” from their latest album, Bankrupt! and followed through with a polished performance of new wave songs that have become their hallmark since the breakout success of “Lisztomania,” which they quickly sang to put the already happy crowd into an even better mood with a dose of European literary cleverness.

Mars overcame a technical glitch in the beginning of “Entertainment,” where his microphone wasn’t transmitting his voice at first, to winning the crowd over by shear force of will. After largely inspiring everyone to groove along with catchy synth medleys, Mars brought it down a notch and literally sat and stood in the front of the crowd for a stripped down performance of “Countdown,” where only he and guitarist Christian Mazzalai remained on stage. It’s a bold move to bring such a big production down to one acoustic number, but it paid off handsomely as the Mars absolutely won hearts and minds with a simpler and slow song (and one it should be said from the band’s enduring fourth album Wolfgang Amadeus Mozart).

In a finale reprise of “Entertainment,” Mars ran amok through the entire pavilion singing to close the concert out on a more frenetic note. It was again an incredibly effective maneuver and the entire audience left on a high note.

I had seen Phoenix once before but the band’s star status definitely has compelled them to new, savvy heights. Their latest album may safely follow in the pleasing tracks of the previous one but they certainly weren’t afraid to take chances in concert. And those risks made the end of the Sweetlife Festival seem all that much more spectacular.