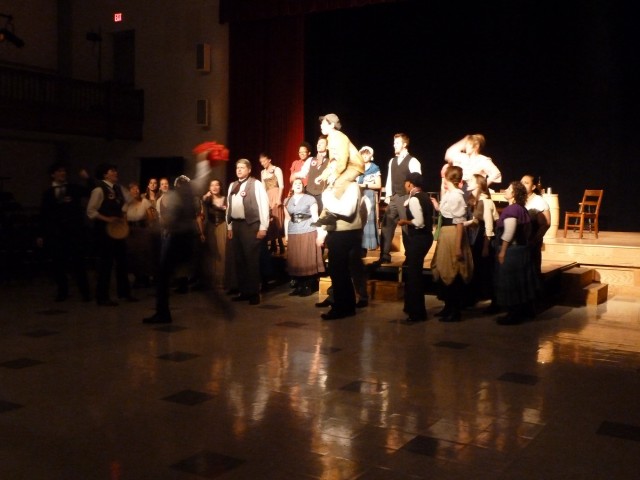 We stepped into the large theater at Calvary Baptist Church on 8th Street and made our way to a seat. Deb Gottesman was instructing a varied chorus of old and young on the rehearsal process and what to expect from the night. My husband – a seasoned actor himself – turned to me and asked, “Is this a class?”

Yes and no. It’s Theatre Lab – an independent, nonprofit school for the dramatic arts. It’s also home to a new production of Les Misérables – hence my husband’s confusion. This was a rehearsal, a class, and a performance all in one.

The cast had gathered for an Act I run-through of the near-immortal musical, but with a twist: This marks DC’s first non-Union production of the Broadway edition. The creative team behind Les Misérables just released the rights to the full adult version with non-professional actors. Theatre Lab was among a short list of US companies to secure those rights.

At this point in the process, the cast still had weeks to prepare for opening night. There was the occasional mistake – the songs share melodies and can be hard to keep straight, and it’s tough to maintain the right tempo throughout when every single line has to be sung.

The cast and crew used every part of the room, which led to some confusion and even injury. Javert hurt his knee in the very first scene, which sent a wave of panic: How can he chase Valjean across the decades if he can’t even walk?

While Theatre Lab did hold auditions for Les Misérables, this production is both an amateur show and a structured class. The cast members have all taken or are currently taking courses at Theatre Lab and thus span a huge range of ability and experience.

Like many professional actors in the city, some cast members use Theatre Lab to hone their skills and increase their knowledge. Others enter as complete beginners and study performance from the ground up.

Take for example, Monsieur Thénardier, played by a former elephant trainer. Or consider his wife in the show – a veteran actor and empty nester – who returns to the DC stage after leaving years ago to be a stay-at-home mom.

To cover all the elements necessary for a production of Les Misérables, the class teaches music performance, staging, character development, and more.

This was a rehearsal, I kept repeating to myself. Just a rehearsal. Actors wore H&M shorts. Valjean sang of 19th century prison in jeans and a t-shirt. And yet we watched them, along with the director and offstage cast. In the broad sense, you could call this performance.

Keeping that in mind, what a performance it was. Going in, I had no intention of mentioning the quality of the show, as it was both amateur and in process. But it’s worth noting how ambitious Les Misérables is for a non-professional team, and how extraordinarily well the cast handled it on the day we sat in with them.

Even if the show had fallen apart – which would have been fine – it’s still Les Misérables. A lone piano playing the opening notes of “Look Down” can make your heart flutter.

But they took it further than familiar melodies. This cast showed a surprising ownership of the piece and sang with power and determination. Before the end of the night, we found ourselves digging for tissues; and it may have been allergies, but I definitely saw director Deb Gottesman wipe her eyes a few times as well . . . cheap t-shirts notwithstanding.

Right after we arrived, musical director Buzz Mauro explained some changes to the blocking. Young Cosette raised her hand.

“What if you don’t understand anything Buzz just said?”

One thought on “In Rehearsal with Les Miserables”