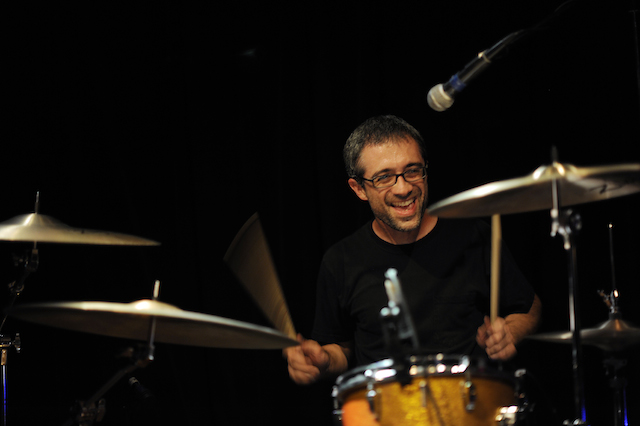 Whether he’s on the road or back home in the District, Ben Tufts is a perpetual student and dedicated teacher. If you ask just about anyone within the DC music scene if they know or have heard of Ben, it’s more than likely that they’ll say, “Yes.” He’s played over 300 shows in the past two years, with over thirty bands and artists, covering most of the continental U.S. and has become a cornerstone of the current DC scene.

His devotion to his craft is immeasurable. As a percussionist, Ben has spent countless hours over the course of his lifetime playing all styles of music from classical to hard rock and now teaches a  wide array of students throughout the greater DC area. But despite his busy schedule, Ben still finds the time to host an annual fundraiser at Jammin’ Java honoring the memory of his late father Craig Tufts, who served as Chief Naturalist for the National Wildlife Federation for 33 years, with the “Ben Tufts and Friends Concert” benefiting the Craig Tufts Memorial Fund. This year’s fundraiser is scheduled for August 17.

I was born in Falls Church, and lived in Reston for a few years before my family moved to the Claude Moore Farm in Sterling, VA. Until I was eight, I had a 300+ acre backyard with a bunch of lakes, ponds, and old growth Virginia forest in it. My closest neighbor was several miles away, so books and records became my best friends. We moved to the suburbs later, and as soon as my parents would let me, I was going to shows in DC. I still remember the smell in the front hall of the old 9:30 Club on F street, the scary bouncers at the Bayou, etc.

My perfect day in DC would depend on the time of year. In the summer it gets oppressively humid, so even though there are some beautiful outdoor spots in the city, I would probably spend most of it indoors. My life revolves around my ears and my stomach anyway, so on the rare day off, my perfect itinerary would consist of trying to cram as much food and live music as possible.

A few of my favorite places to eat are Tacklebox, Ben’s Chili Bowl, Sticky Rice, the falafel place in Adams Morgan, Nando’s in Chinatown, any pho place, the list goes on… The food at The Hamilton is amazing… which leads me to clubs. For a while in the early 2000s, it seemed I’d hear about another club closing every year or two. I’m really excited about all the new spaces for music that have opened up in and around DC area over the past few years — The Hamilton, Hill Country, The Fillmore, Epicure Cafe in Fairfax, the Howard Theater, the Atlas Performing Arts Center. I’m sure I’m forgetting a few.

It’s especially amazing considering we already have so many great rooms — The State Theatre, Black Cat, Blues Alley, galaxy hut, the legendary 9:30 Club, and my home away from home, IOTA. If I’m not already playing, I’m usually at a show, and sometimes I’ll manage to hop clubs and catch two or even three in one night. courtesy of art around

I don’t know how hidden it is, but it’s a gem . When I want to pretend to know something about art, I love going to the Phillips museum. It’s inside an old house in Dupont, so it doesn’t have that sterile feel that most museums have. Plus, I think I could just sit and stare at the Luncheon of the Boating Party for an hour.

I wouldn’t be surprised if someone hadn’t already picked him, but my favorite DC personality would have to be Kojo Nnamdi. I spend a lot of time driving to lessons, rehearsals, shows, etc., and if I’m not listening to music I’m learning for a gig, I’m usually listening to WPFW or WAMU. I really respect Kojo because even though he’s a transplant, he knows more about DC than most natives. His programs are balanced and informative, and he manages to keep things light and moving along. I think that must be really difficult to do.

What do you think makes the DC area a special place to be and why?

I guess what makes DC unique is that there’s really hardly any blue-collar, “salt of the earth” population in town. It’s one of the only cities in the country without any significant industrial sector. This is a discussion I’ve had with plenty of my fellow musicians. What makes it particularly challenging to develop a local following here is that the general populous is here for a short time, with an agenda, and that agenda doesn’t usually include settling down, starting a family and investing in the community. It’s an ambitious town, but that ambition tends to be political. I think it’s part of why the cover band scene here is so huge. People all along the political food chain are beating up their brains all day and when they get off and go to happy hour, most of them don’t seem to want music that’s going to make them have to think. Of course there are exceptions to every rule.

The point I’m trying to make is, DC musicians have to work extra hard to get people to listen. I’ve always suspected this was true, but my recent travels really solidified this theory. I think it’s conditioned me to hustle and network harder than if I’d grown up in a town like Nashville or Austin, where you can spit in any direction and hit a dozen musicians. Additionally, it’s this musical climate that’s produced some of my favorite music — hardcore punk rock and go-go. These are “brands” of music that could’ve only happened here, and I’m proud to live in a town where those reverberations affect and infuse everything I do as a drummer and musician.