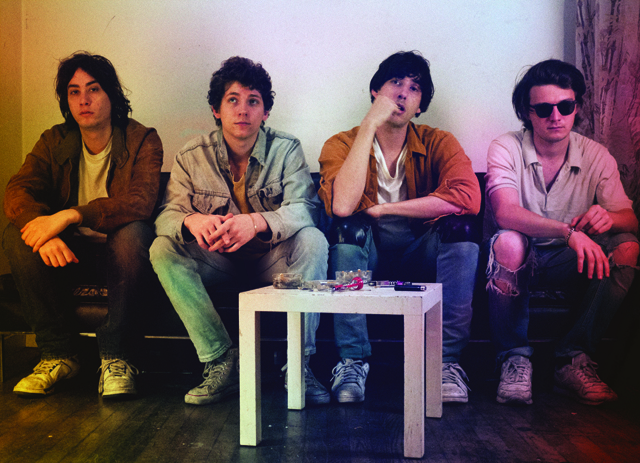 MM: About the record! I really like it. But I find the title very interesting. You came back after five years with an album called Strike Gently. Were you trying to say something? Is there a meaning behind that title? It seems you want to have some bite but at the same time, it’s not as raucous as your first album.

DC: You can infer all kinds of things from the title. It’s meant to be a bit ambiguous. It just felt right for the vibe of the record. It seemed like a title that was appropriate. Sometimes you title things when they are done, but that title was in my head maybe halfway through making the record.

MM: After listening to the songs and the guitar playing, I came away with the idea that the title was about the guitar playing. There are a lot of sophisticated guitar players coming out of New York City today. And you’ve gotten a lot of accolades for how you play. So I suspected that Strike Gently was perhaps a guitar reference for the way you play!

DC: [laughs] That’s cool. I had not heard that interpretation. But I have to say I don’t have a heavy right hand. I think I’ve broken one string in the last year. Does that mean anything? I’m not a thrasher. But Xan [Aird] played all the leads on the record. For me, that’s the sound of the record. It has a lot to do Xan’s leads and John’s drums and Max’s bass lines [John Eatherly and Max Kamins, respectively]. Everybody made their own parts and it really makes the songs what they are. It’s a lot of fun to have a song and watch it grow into this thing where everybody on the band makes a contribution to it.

MM: Any songs you are particularly proud of?

DC: I don’t like to single them out. I don’t want any of the songs to get a big head or an inferiority complex! I let them all exist together. They all made the cut. They are all winners!

We had a lot more songs that didn’t go on the record. We wanted to make a record that had a cohesive vibe. I was going to make it an eight-song record, but there were some songs that I hadn’t considered in a certain way. We started messing around with them, and they made sense. I’m down with all of them!

MM: It sounds like you’ll put out another album sooner than you put out your last album?

DC: Yeah, we are planning to put out a record in September as a free download. We’ve been touring a lot so we haven’t gotten to record it yet. But as soon as we get home, we are going to write and record a record and put it out for free as soon as it’s done. We are sitting on a bunch of songs, but the whole point is to have it be something that happens quickly and express where we are and exactly why we are making it. So we are going to watch a bunch more while we make it.

MM: What’s next in the future after that? Do you hit the road again?

DC: There’s a bunch of European dates in January for a European tour. I haven’t thought beyond that. We are probably going to make a studio record after we do this next thing. We’re just going to make it ourselves in our space where we live.

MM: Speaking of that next album, how has been the process of working with Cult Records? You’ve said in other interviews they have been very supportive. They don’t seem like they would be the kind of label to constantly ask, when’s the next album! You’ve said it’s very collaborative and creative. [The Virgins were the first signing to Cult Records, owned by Julian Casablancas of The Strokes.]

DC: They are really cool. They are really supportive. They encourage us to do what we want to do. They are excited about the free download. We always knew we would make another studio record, so we will move onto that. It has nothing to do with anything except getting music out that we are excited to make. And that’s exactly what you want from your label.

MM: You’ve played Washington, DC, before, right? I’ve never had the chance to catch you before now.

DC: Yeah, we played at the Black Cat! We’ve played in DC a fair amount. For most of our US tours, we have played DC. We played in a church basement once.

MM: I know you may not have the time to hit DC when you stop in at Merriweather this time around, but is there anything you like about DC when you come through?