If you need a reason to smile then Don Kim is a guy who can help get the job done. Whether he’s on stage cracking a joke, at home playing music with his friends, or out at a bar playing a game of darts with a beer in hand, Don’s the kind of guy you want to be around.

Most recently, the ukulele toting singer-songwriter released an animated music video for his song “Beaver + Duck = Love.” Go ahead and try to watch that video without cracking a smile. I triple dog dare ya.

For a long time, I didn’t love DC (gasp!). I went to college at the University of Maryland (Go Terps!) thinking that I was hitting the road as soon as I was done. I tried to leave but I was immediately drawn back. Over time, I realized that all my complaints about this area were because I wasn’t looking for the right things. Sure it’s stuffy, there’s lots of politics, and jumbo slice tastes horrible (except when drunk), but it’s also full of highly under-appreciated art, culture, and music. It’s home to me because whatever I’m in the mood for, I can find it and I’ve been spending the last 5 years looking for all the gems that this area has to offer. It’s been an amazing adventure and I learn something new about this place everyday. 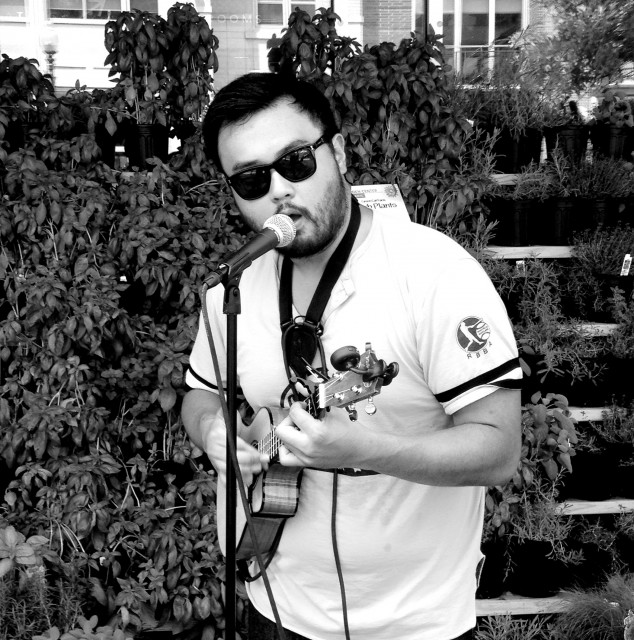 It starts and ends with food. I live near the H street area so I don’t venture far from there. I would get up and head over to Sidamo for coffee and a large tea cake. Then for lunch, it’s off to Union Market where I stop and see Thomas the Breadman (aka my carb dealer) and then venture over to Neopol Savory Smokery to get a salmon BLT.  After an afternoon at the dog park (I have a new puppy so this is critical), I would venture over to H Street and put my name down at Toki Underground. While waiting, it’s a night at Atlas Arcade with my pocket full of quarters to tackle the Simpsons and/or Ninja Turtles classic arcade games. After about 3 hours of gaming, 5 Natty Bohs, and 18 bucks in quarters (take that Shredder!), it’s time for kimchi ramen and dumplings.  The next day, I would debate going to the gym while watching Netflix in bed.

The DC Arts Center in Adams Morgan. It was the first place I played in DC proper. It’s home to the Capital City Showcase hosted by Christian Hunt (big beard, bright red suit, real nice guy, not Santa). It was a really special show where I played the uke on stage for the first time and unveiled my song “Beaver + Duck = Love” which I’ve been pestering my friends with ever since (and now in animated form). I think that place and performance really helped to hone my act. I don’t take anything too seriously and I love audience interaction. It’s now a yearly tradition and I’ll be back there in November.

Zia Hassan is my DC music buddy, producer, and spirit animal. The guy not only puts out great music and videos but he recently quit his cushy job to become a teacher, which is pretty much the coolest thing a person can do in this world. He produced my first EP and gave it sounds that I could only dream of. I also get to play music with him which is cool too. We’ve recently formed a trio with Dave Farah and we’ll be playing for the first time at Buncearoo in Purcellville, VA opening for Barnaby Bright. It’s going to be magical (it’s at a whiskey distillery which will assist with the aforementioned “magic”).

What made you decide to focus on playing the ukulele as opposed to another instrument while composing and performing your original music?

I’m going to get really lame here and say something very cliche: the uke chose me. I consider myself a vocalist first, then a humorist, and only a dabbler of instruments including guitar, bass and piano. But the very first time I got a ukulele in my hands, I found a C chord and was immediately able to find progressions and melodic movement which eventually became a track on my EP called “A Long Time“. It’s amazing to see how loved the uke is by so many people. It’s the only instrument that people bring to concerts and they become part of the music experience (the size might be a contributing factor as well). I’m lucky to have received an amazing endorsement from Moku ukuleles and they’ve created amazing instruments that are both affordable (I’m a bit of klutz so I need spares) and sound incredible. I get to compose, perform, and teach fun music without having to lug crazy amounts of gear around (sorry upright bassists).

You can see Don and his trio featuring singer-songwriters Zia Hassan and Dave Farah LIVE at Catoctin Creek Distilling Co. in Purcellville, Va. on Thursday, September 12 with Barnaby Bright. | Tickets |