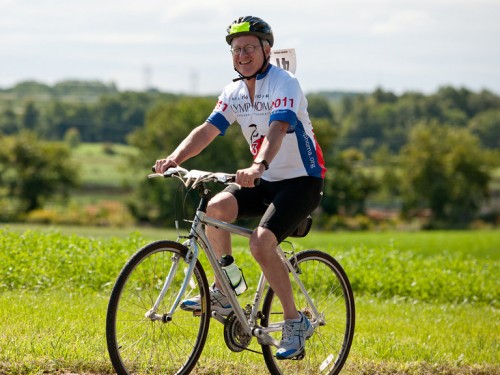 In the spring, an early morning walk on Roosevelt Island to look for warblers and wildflowers. In summer and fall, a morning bike ride with my wonderful wife on the C&O Canal towpath toward Great Falls. In the afternoon, it’s the Phillips Collection near DuPont Circle (I’m a sucker for somebody else’s interesting taste in impressionist and modern art). Finally, in the evening, dinner at Rasika followed by whatever oddball production Woolly Mammoth Theater is doing.

Before I answer, I should mention that I have a form of blood cancer. My hidden gem is the Lombardi Comprehensive Cancer Care Center. While most people have probably never heard of the Lombardi Cancer Center, for me it’s a lifeline. Dealing with cancer is tough but here in D.C., accessibility to top-notch health care makes everything better. I could go on and on about the wonderful restaurants, neighborhoods, entertainment and outdoor activities that I enjoy so much but none of that would matter if I didn’t have the best possible care. Lombardi is one of the top cancer centers in the country and we in DC are very lucky to have it here.

That’s easy – my oncologist, Dr. Bruce Cheson at the Lombardi Center. Dr. Cheson isn’t about one-size-fits-all solutions, which is incredibly important when it comes to blood cancer. We’re at the frontier of research for blood cancer treatments which are advancing very rapidly and Dr. Cheson is at the forefront of that work. I share Dr. Cheson’s excitement that chemotherapy is rapidly becoming obsolete for blood cancer patients like me and many others in the greater DC area.

Dr. Cheson goes the extra mile, literally. Dr. Cheson and his wife Christine started a charity bike ride in Montgomery County called the Lymphoma Research Ride to raise much-needed funds for the Lymphoma Research Foundation. The seventh annual Research Ride was September 22 and it has now raised nearly $3 million for blood cancer research. I’ve participated every year and thank Dr. Cheson for putting together something that is not only fun, but is helping to fund cancer research that can help people like me.

What would you say has changed the most in DC over the course of your time living here?

People moving back to this wonderful city. When I first came to D.C. in 1972, DuPont Circle was nothing but construction and disrupted traffic as the first six-stop segment of Metro was being built. People were fleeing DC like crazy to the suburbs. As the tax base declined so did the schools and city services, making the simple act of renewing my DC driver’s license something to dread.

But now – Logan Circle? 14th Street? Anacostia? All are on the upswing as people move back in and commerce takes off. Many formerly rundown areas are not even remotely recognizable compared to what they were when I arrived way back when. In the 1990s, my wife and I feared we’d have to move to the suburbs to avoid dilapidated public school buildings and dropping enrollment, but the schools were beautifully renovated and are now thriving just like the rest of the city! The renovation of Wilson High School is sensational, if you haven’t seen it.

DC is making a name for itself and it’s not just about politics any longer. I particularly love all the new restaurants popping up what seems like daily. If you ever find yourself in my Palisades neighborhood, check out Makoto. You’ll never forget the incredible Japanese food nor the experience.

One thought on “He Loves DC: Geoff Grubbs”