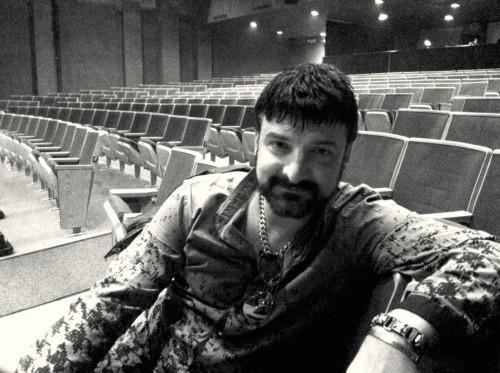 Paata Tsikurishvili is the founding artistic director and CEO of the acclaimed Synetic Theater, a physical theater fusing dynamic art forms — such as text, drama, movement, acrobatics, dance and music.

Joanna Castle Miller: What does it mean for you to be Synetic Theater’s artistic director?

Paata Tsikurishvili: Let me just back up a little bit: I used to dream about becoming an artistic director, many many years ago back in my country (Georgia), and especially to somehow get to the USA and open a company, because I had my own vision from the very beginning. I believed that synthesis of the different arts is the way to go. And I’m living my dream. It’s just a blessing. It’s my life. I love it, every second of it.

JCM: What all does your job involve?

PT: Being founder of the company involves the Board of Directors, organizational things, management things, the budget – it’s all there. But what really excites me is the artistic side. I do manage artists, so it’s one of my skills to make sure I recognize talents and then manage the talents and use them in the right direction.

We audition actors and then we teach them expressions: internal, external, psychological, movement, theatrical dance, you name it. Next, I’m researching all the time, nonstop, to find out what my season is going to look like.

Then I start working with a dramaturg and playwright. Most of our work is based on world literature and classics. To take it from literature to a staged play is quite challenging, and especially for Synetic, because our vocabulary of storytelling is not just verbal. It’s visual, movement, sound. It’s synthesis. So I probably spend 6-9 months preparing things.

JCM: For each piece?

JCM: How do you decide what shows to include in your season? What’s that process like?

PT: Sometimes I find themes for the season; sometimes I want to change and do something very different. It depends on the year. And life is dictating me. For example, in A Midsummer Night’s Dream, I chose that production because of Alex Mills’ Puck.

JCM: So sometimes the actors inspire the decisions?

PT: Yes. A lot of actors – I don’t want to leave anybody out. And 50% of me is my wife Irina. We brainstorm together and argue all the time, and I have to keep in mind what works for her. Sometimes I want to have dance style productions because I know it’s the best use of her.

PT: I think the biggest challenge is that no one can really define what we do with one word. People say, “Oh, this is not really a theater; it’s dance.” Sometimes we do shows on the water – that doesn’t mean we’re a swimming company, right? So if we dance, it doesn’t make us dancers.

The 21st century definition of theater can mean many different things for different artists. Every artistic director has their own approach, their own vision.

The challenge is also to get someone into the theater who has never seen a show here. Because if I say, “Shakespeare without words,” you go, “What the hell are you talking about?”

Right? It’s hard to imagine, but once you come and see it becomes addictive.

JCM: How have you seen Synetic evolve over the last few years?

PT: Synetic is really blessed to have actors almost like a repertory. Some of our actors have been here more than 10 years. And every time we put on a show, they become better and better and better. So it gives me the opportunity to find hidden talents that they carry and the buttons to push it. And it’s a blessing to know each other so long, for such a long time. Every time we do something new, or better, or mastered differently, we all grow together.

It was 2003 when I first produced Hamlet… the rest is silence. That’s why I’m bringing back Hamlet this year. In the next ten years, my goal is to get national and international, which means I will get some agencies and start pushing for touring. We’ve trained more than 160-180 actors, so everyone is ready, and they love it.

JCM: What’s one show would you likely never, ever produce at Synetic?

PT: I don’t know! I have no answer for that.

But let me tell you this: everything is changing around us, life is changing, and I love experiments. Maybe in the next few seasons, I’ll figure out how to produce a musical. I see how a Synetic-style musical could be, with a new angle, differently done of course, and for some reason it excites me. I never thought about it before, but now I think “Hmm… I’ve got to do this.” I’ve started having meetings.

JCM: I hate that we’re done. Is there anything else you’d say about your work here in DC?

PT: Of course! The reason that Synetic become such a successful organization is nonstop work of myself, Irina, and of course my colleagues. I want to make sure the actors get the credit because without their dedication – the time, the execution – Synetic would never have been able to achieve what we did. That’s how Synetic became American theater.

I’m very excited to say I’m living my dream. I was able to found a company – an American dream story. I’m happy to be part of this, in one of the most diverse and unique theater towns.

I’ve been to many world theater festivals; I have seen so many things. Washington’s theater community is very unique, very diverse. We have tiny theaters taking huge risks, and we have big theaters doing unbelievable work. It’s an artistic melting pot right here. And I’m happy to be a part of it.

Synetic Theater is located in Crystal City. Their current show, The Picture of Dorian Gray, runs through November 3.