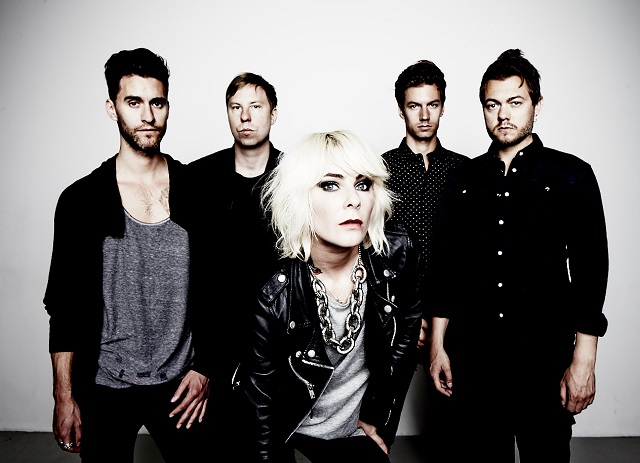 The band wraps up it short U.S. tour with a performance in Los Angeles Thursday, Oct. 24, but they didn’t come to D.C. at all this time around. So Yasmin and I took advantage of the government shutdown last week to hop up to the Music Hall of Williamsburg to see The Sounds perform on Monday, Oct. 14. They were in great form—and it was one of the better shows I’ve seen out of the 10 times I’ve seen them.

It’s quite unfair of me to do so, but I often refer to The Sounds as a “Swedish Blondie” when people who don’t know them ask about them. Ivarsson, who is indeed blonde and lovely, fronts the group while her razor sharp bandmates lend their talents to the overall sound of The Sounds, thus making some parallels to the famous New York new wave band inevitable in my book. But where Debbie Harry would occasionally lapse into spaced-out disco, Ivarsson has more punk rock snarl and bite. She also absolutely loves her audiences. In Williamsburg, she unexpectedly took a dive into the audience at one point, placing an amazing amount of trust in people to catch her with no notice whatsoever. Ivarsson shows similar trust when she talks directly to the audience about travails such as the loss of a friend or similarly personal things on occasion when introducing the band’s ballads.

I had the good fortune of catching up with Jesper Anderberg, one of the best keyboardists in modern rock today, for a conversation before The Sounds played in New York last week. Here’s a bit of that conversation:

Mickey McCarter: You’re not hitting D.C. on this tour! Will you be back soon?

Jesper Anderberg: We go back to Europe for a longer European tour, about six weeks. But then we are coming back to the States in late winter/early spring for a full U.S. tour. We will definitely be back in D.C.!

MM: This album is a really good album. It has a good mix of songs that show of a bit of the dichotomy in the music of The Sounds. Some songs are upbeat and rebellious and others are very comforting and quiet. Is that dichotomy a conscious thing? Does it depend on who’s writing the song?

JA: I think it’s mainly who is writing the songs. Maybe not as much with the rebellious songs but with the less ordinary songs. We always have been fond of songs with a more up-tempo dance vibe. But we can get sick of that after a while. We have a hard time settling on one type of music. We would get tired of ourselves if we only did regular dance songs. We want to change it up.

MM: What were your particular influences on this album?

JA: I went back and listened to a lot of older stuff that I listened to when I was younger like the Clash — a bit more of a punkier sound–also older bands from the ’80s like Ultravox that I listen to a lot in general.

What’s the part that I like when I listen to a song? For me, it’s usually about the groove and the simplicity. For Felix, he likes the beat of it. He listens to more modern music with more beats and melodies. We are a bit different. Frederik has been writing on this album as well, and he’s more toward my way of thinking with the simplicity of the songs.

MM: You’re an excellent keyboardist, and I’m excited that you mentioned Ultravox. Billy Curry of Ultravox is one of the best keyboardists ever. Do you learn from other keyboardists?

JA: A little but not very much!

Billy Currie was a huge influence on me obviously. And Brian Eno from when I was younger. The stuff he did on the first Roxy Music album was very cool. But otherwise, I don’t really pay attention to band members. I listen to the music overall and not a certain member of a band. [Ed.: I have to interject that The Sounds “Rock ‘N Roll,” a sequel of sorts to Roxy Music’s “Love is the Drug,” is perhaps the most amazing song ever written!]

Today, a lot of band have keyboards. In the 90s, they really had a really suppressed role in bands. Nowadays, they are more in the front. There is a lot more keyboard-based music. Keyboards add to a sound no matter what the genre.

I told Anderberg that one of my favorite performances of The Sounds came in support of their third album, Crossing the Rubicon, when they played both Ram’s Head Live in Baltimore and then 9:30 Club again on Sept. 21, 2009. In the middle of the set, they performed a very stark version of “Night After Night” (as least I recall that was the specific song?), and it was just Jesper on the piano and Maja on vocals, giving the rest of the band a break. The keyboardist sat at a piano with a glass of red wine while the usually vampy vocalist sang plaintively to the audience. It was solemn but the energy and the chemistry were quite good.

I heartily recommend you buy the new album, Weekend, when it comes out Tuesday and “Shake Shake Shake” in anticipation until The Sounds return—hopefully in March!