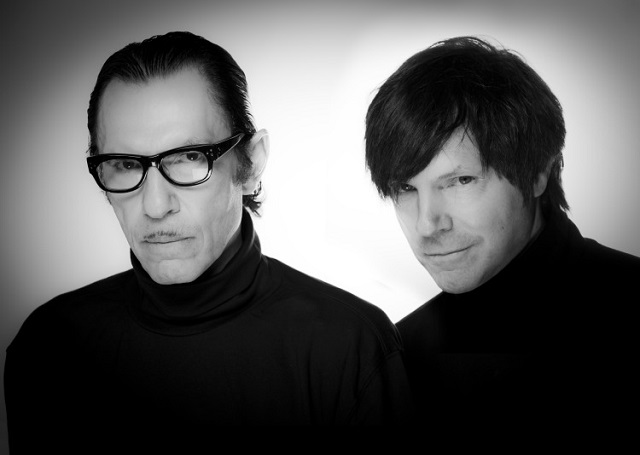 So by that measure, the show was definitely a success. But it could have been better.

Sparks recently kicked off a second wave of their tour, Revenge of Two Hands, One Mouth, chucking away most of the songs they performed on its first iteration. I caught that first iteration at Hollywood Forever in Los Angeles in April between their appearances at the Coachella Music Festival. The small Masonic Lodge at Hollywood Forever was packed with Sparks admirers and the energy and focus was very high, which inspired a spirited performance from Ron and Russell Mael. In comparison, Sunday’s show seemed a bit perfunctory. While they were equally well admired by the crowd that turned out for them, they didn’t seem particularly driven to turn up the charisma.

Which may have been well enough for those who never get to see Sparks. Russell Mael opened the show with a demonstration of what the audience was in for that night with “Your Call’s Very Important to Us, Please Hold” from their 2002 masterpiece Lil Beethoven. It was a good song to lead because it nails exactly what you are going to get with Sparks: inventive twists and fanciful lyrics. Russell starts by sampling himself making noises that become a bit of a background cacophony of clicks and whirrs and then performs a clever sing-song wordplay over synth beats. He’s getting mixed signals because his call is important but he has to hold. It’s the sort of oxymoron that Sparks loves.

These opening songs tell you instantly whether you are going to enjoy this show or not. Are you up for a great deal of dry humor and a couple of jigs, you might catch some ingenious musical flourishes. But if it’s not your cup of tea, you may well leave scratching your head. This sort of formula dates back to the breakthrough album by Sparks from 1974, Kimona My House. If you get the pun, you already see where the rest of this is going.

Sometimes the approach works well and sometimes it falls flat. “Those Mysteries” from 1977’s Introducing Sparks becomes a bit of a metaphysical cabaret, and may leave you feeling a bit wistful. But “Big Boy” from the same year feels too much like a novelty song.

Things really come together by the end of the show, however. The main set closed out with a surprisingly emotional rendition of “When Do I Get to Sing ‘My Way'” from 1994’s Gratuitous Sax & Senseless Violins. Russell Mael imparted some longing to the song that made you understand its intent — when do you get that feeling of satisfaction that Sinatra must have felt?

The encore showcases “The Number One Song in Heaven,” which is consistently amazing and truly manages to showcase the virtuoso talents of Ron Mael. This song, a result of a collaboration with Giorgio Moroder, captures what ideally I would like to see from Sparks every time–a moving if quirky lyric with soaring, rolling synths. Ron also takes the opportunity during “Heaven” to stride away from his keyboard for a sample of a famous dance he performs in the “Cool Places” video, which always is met with rapturous applause by long-time Sparks fans.

The Mael brothers are scheduled next year to begin work on fulfilling their ambition of making a film, The Seduction of Ingmar Bergman. And this will continue to move them into film and stage, where they clearly would prefer to be these days. I’ve no doubt that this and future projects are completely worthwhile, but I’ll miss some of the unfulfilled potential, demonstrated by “The Number One Song in Heaven,” of a band that could write beautiful pop songs with a sense of fun and even irony.