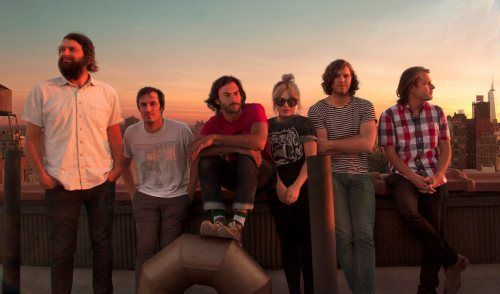 My show takeaway is strongly influenced by the group’s utterly internalized performance that had the group turned inward on themselves and their bandmates, and away from the audience. They barely interacted with or even looked at the crowd; they were aloof, brief and disconnected. The one time I saw a band member connect with anyone was when Josiah Johnson started clapping and singing to a group sitting in the “friends of the band” balcony. I felt played at, left out of the performance, an intruder in a private jam session, as if me, and the other audience members, were of no importance or consequence to THATH; they could have taken us or left us.

While THATH did sound good, their sound felt reigned in, stunted. There was so much room – in both the 930 space and with the audience – for them to expand into and occupy, but they didn’t. I didn’t feel the passion, the emotion, the weightiness, that I had expected from this group of talented musicians.

Heading to the show I thought this was going to be one of those rare occasions when the right band comes at the right time, when you’re in the right mood. I am a strong fan of the hypnotically enchanting, warm, sweet, enlivening songs on both their albums, and last night I was mentally and physically primed to be wrapped in a THATH blanket. But that band didn’t show up.

Perhaps it’s because they’ve practically been on tour since 2011 and are just burnt. I would totally get that. But perhaps this – an almost indifferent coolness – is just their performance style; if that’s the case, then I’ll pass next time they come to town.

Additionally, there was some awkwardness in the transitions between songs, sometimes lasting almost a minute, which made the show experience even more disjointed and awkward. There was also a shocking lack of vocals from Charity Rose Thielen who, when she did sing, was a crowd favorite. All I can say is: Let the girl sing boys.

Despite my live experience, I still strongly recommend listening to THATH. Both of their albums are great, but make sure to go all the way through because I think their more poignant, profound songs are found towards the ends.  My favorites are: