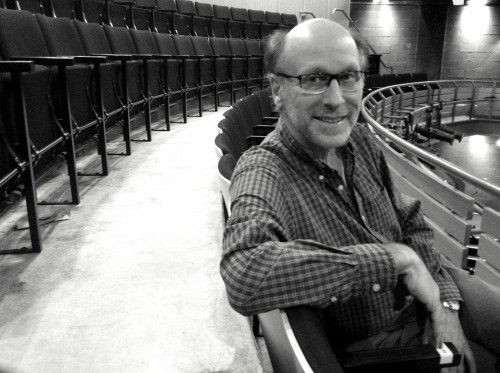 JCM: Woolly has a long legacy at this point, but how have you seen it change in the last 5 years or so?

HS: Moving into this space was obviously a big watershed. We’re a stone’s throw from the National Mall. And the space is obviously of a much bigger scale than the spaces we’ve been in previously. As soon as we got here, I basically said, “No small work.” Big work! I mean, it’s a big stage. The work has to have big scale, big intellectual scope. The bread and butter of our work is going to be on a bigger canvas, it’s going to ask harder questions, it’s going to tee up a conversation that has real substance for the very smart, diverse, complex audience that we have in our city.

The key question we ask now about any play is “what’s the conversation?” Is it a meaningful and timely conversation?

JCM: How do you go about choosing plays for your season?

HS: The first thing we look for is good writing – writing that seems to have an original voice. That’s still the bottom line that (Woolly) has been carrying for 34 years – a certain snap, crackle, pop in the language of the writing.

If I don’t get interested in the voice of a writer after 15-20 pages, I’m not likely to get much further in that script. And if that carries me through a play and sustains my interest, then we start interrogating these bigger questions about its timeliness and relevance and “What’s the conversation?”

We also still sustain over all these years a kind of anti-realism bias. We make exceptions to that, but we are really looking for writers who are pushing the envelope in terms of style.

JCM: How do you narrow it down to the final, select few?

HS: There is no process – it’s amazingly intuitive. We have had thematic-based seasons in the past 5 or 6 years where we’ve announced a theme each season, and you would think even that would be something we’d start to coalesce around, but usually the theme really comes from the plays rather than fitting the plays to the theme.

Or sometimes we find 2-3 plays that seem like they have a interesting conversation among them, and then we’ll look for a fourth or fifth to fit in with that. But I try not to be too formulaic in any way whatsoever. I think probably less than most artistic directors about questions of balance. I’ll do a whole season of plays about death and people will say, “Are you obsessed with death or something?”

JCM: What do you think is the biggest obstacle you face in attracting DC audiences?

HS: Well, here’s the Woolly miracle: We’re in the right city. I don’t think we could have known how good a city it was for the kind of interests we had, because the audiences are so smart and very, very open-minded. So I don’t see a lot of obstacles in terms of audience.

I think the challenge is trying to figure out how to connect with audiences, and that’s changed enormously over the years. And we’ve added the bigger challenge of what we call “audience design.” My interest in terms of audiences is not size – it’s vitality. Sure, big audiences are good. Big audiences add vitality. But a homogeneous audience that only comes from reading the Washington Post review is not an interesting audience to me.

So I think our connectivity strategy at Woolly is partly built around this notion of audience design – of intentionally asking who you want to be in the conversation in order to make the play meaningful. If the play is about economic injustice and you have an audience of all rich people, you’re not really having a conversation.

Our goal with respect to audiences – and this is a very personal goal of mine – is to not think that we’re just competing in the marketplace of leisure-time entertainment. Sure, we’re entertaining, and our work tends to be funny, but I think the statement we want to make is that theater is part of the civic and intellectual life of our city.

That’s the frontline I want to be on – to say to people, you can’t afford not to go to theater if you consider yourself an engaged and informed person. I want theater to feel like it’s that central to the life of our city.

JCM: I was recently reading a keynote of yours about the tendency to equate “storytelling” with theater, which you don’t agree are necessarily one and the same. I was curious if you’ve developed your own definition of what theater is?

HS: I think there’s a tendency in the United States – because we work so quickly, because the economics of theater in this country really don’t support sustaining companies of artists over a long period of time – you can’t nurse a play along and work on it for over a year with the actors, set it aside for a while, come back to it, the way the major European companies can work. Because our economics don’t support that, I think there’s a tendency for theater in the United States often to fall in the same box. And I call that box storytelling. It’s my shorthand for theater which is largely narrative-based.

The storytelling mode is playwright-centric, so the story or script is created first by the playwright and then the director gets involved. And then the actors are shoved into it in the last 3-4 weeks. I think the United States is one of the – if not the – leader in the world in that kind of theater.

It’s just that, based on what I’ve seen elsewhere, it’s not as layered or as complex as the work that you’re likely to see in other parts of the world, where the acting is in a dialogue with the text – which creates a very complex and layered experience and is just much more time-consuming to create.

That’s what I’m trying to figure out how we can get at a little bit more at Woolly, or at least sometimes get at.

JCM: What’s the one show that you would never, ever produce at Woolly?

I often ask, “Who needs us as a theater?” because we really like to play a role in the early rollout of a writer’s career. Not exclusively, though, because we also want to continue relationships with mid-career writers when we can.

There has to be some challenge in it, and a lot of plays I read are just too easy. I’ve often said we’re sort of challenge junkies at Woolly – and if we can’t define the challenge for ourselves and our audience, we’re not likely to do it. So I think when something gets comfortable, I’m not interested.