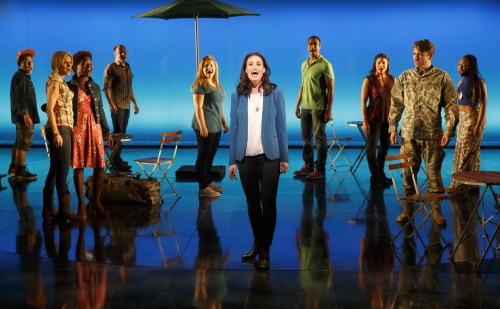 However, that ending, while it found a way to tie the two worlds together into a fairly complete conclusion, also negated the whole point of the show in doing so. This entire premise, based on the fact that destiny is created by the individual choices humans make, is erased by the realization that regardless of which simple choice Elizabeth made five years prior, it really didn’t matter because, in the end, fate was going to step in and make the choice for her. And, if fate is going to decide the course of human life, why bother considering whether you made the right choice if there is, ultimately, no actual choice?

If, existentially, there is no choice in life, at least there is a choice in casting. And the cast of If/Then is pleasantly diverse and unique, shying away from a homogenous ensemble and predictable supporting characters in favor of actors who look and act more like actual humans than those usually found in the typical Broadway assembly line of tall, lithe, unrealistically beautiful people.

Clearly written as a love letter for Elizabeth, If/Then provides Menzel with a star vehicle that she aptly handles with finesse and ease. Combining her talent for dry wit and her beautiful, bright voice, she really is stunning on stage and proves herself worthy of her status as a Broadway superstar. Although playing supporting roles to Menzel’s Elizabeth, LaChanze, Rapp, Snyder, and Jerry Dixon prove that they are also worthy of star status. LaChanze is a natural talent with such smooth vocals that I found myself excited each time she sang and secretly hoping that somehow Kate’s story line would not be merely a supporting one. Likewise, Rapp’s Lucas, written to be quite different in the two scenarios, showed great acting prowess by navigating flawlessly between the two. Snyder, as Elizabeth’s husband, Josh, in the coffee scenario, was so endearing, it was easy to see why Elizabeth gave up the single life for him and made it that much more heartbreaking when she had to give him up. Dixon, as Stephen, Elizabeth’s boss in the rally scenario, defies all stereotypes of the smarmy, arrogant boss, dripping icky sex appeal and was, instead, a genuine, down to earth, handsome man to be respected and liked. Rounding out the cast was an incredible ensemble who all successfully blended into the scenarios while maintaining individuality of character.

Musically, there are a handful of numbers that will no doubt find their way into the audition songbook of every aspiring actor, including “You Don’t Need to Love Me” (sung by Lucas declaring his love to Beth), “Hey Kid” (sung by Josh to his unborn baby), “What the F—“ (sung by Elizabeth during two separate moments of romantic weakness), and Elizabeth’s existential awaking torch song “Always Starting Over.”

Knowing that the next stop for If/Then is on Broadway, and knowing that while I thoroughly enjoyed the show, I left with a lot of confusion regarding what the actual point of the show is, I’m interested to see what the not-so-distant future holds for it. IF one small decision really can alter the course of one’s life, THEN maybe a few small changes can alter the course of the show and make it a success on the Great White Way.

2 thoughts on “We Love Arts: If/Then”