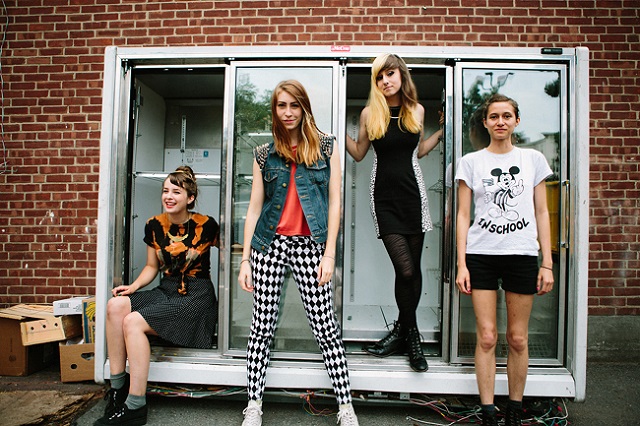 The ladies took a few minutes out of their touring schedule to answer a few questions for We Love DC via email.

Mickey: There have been a rush of young bands today embracing psychedelic or folk tendencies. Against this backdrop, Potty Mouth seems pretty refreshing with its guitar-driven punk melodies. Do you feel like you’re doing something different than your peers in your style of music?

Abby: I don’t think we’re doing anything that different than our peers. We were conceived out of an area with a lot of musical background, especially with punk elements, that it feels natural to be playing the way we do.

Mickey: In other interviews, the band has stepped away from the riot grrl label — and frankly you don’t sound like a riot grrrl band from the songs I’ve heard. Still, given that your band shares a name with the Bratmobile album, and you’re playing in Washington, D.C., which has some history with the riot grrrl movement, how much of an inspiration or influence has it been on the band?

Phoebe: We may share a name with a Bratmobile album, but that was more of a coincidence than an intentional reference. Riot grrrl has influenced us all individually, but it doesn’t directly inform our sound.

Mickey: Honestly, the band actually has a great sound comparable to a lot of great U.K. bands of the late ’70s to mid ’80s. Am I off-base in thinking that you find a lot of inspiration from such bands? Any favorites among them?

Ally: Not off base at all! Personally, most of my musical taste revolves around mid-late ’70s/early ’80s punk — so I’m always glad when people can hear that influence in our music. Someone once compared us to the Buzzcocks, and I thought that was a pretty cool comparison. Some of my favorite bands from that era include Stiff Little Fingers, the Undertones, Buzzcocks, X-Ray Spex, Siouxsie and the Banshees, the Chameleons, Joy Division and others.

Mickey: Your first album, Hell Bent, debuted to largely very positive reviews! What do you attribute that to? Smart lyrics? Catchy riffs? Something not so obvious?

Ally: Yeah we’re really excited that it was received so well! I think it probably has to do with the catchy qualities of the songs and how general and relatable the lyrics are.