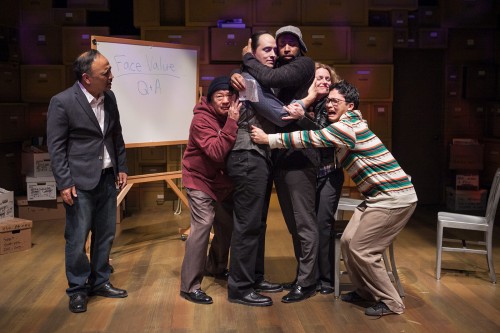 The show sees David Henry Hwang (Stan Kang) fresh off his Tony win for M. Butterfly speaking out against the controversial Pryce casting. The issues from the controversy are heightened in hilarious fashion as Hwang finds out that the Asian lead he casted in his upcoming production is actually white. The show also touches upon Hwang’s family life as a first-generation Asian American as well as events of the time, such as the Wen Ho Lee indictment during the Los Alamos information leak investigation.

Director Natsu Onoda Power assembles a cast (Tonya Beckman, Mark Hairston, Brandon McCoy, Sue Jin Song, Al Twanmo, Rafael Untalan, and Jacob Yeh) that works well together. Several cast members play “color blind” roles, such as Song playing Lily Tomlin, which only deepens the show’s themes of race and identity. While on the surface it may sound out of place for Theater J to put on a show focused on the Asian American experience, the idea of cultural identity is one that applies to not only Asians but Jews, African Americans, and any minority living in America today.

Sure, you can suspect by my name or appearance that I am a fan of this production, however what makes this show great is not only the entertaining yet striking presentation of an oft-discussed diversity issue, but a more universal message that doesn’t hit the audience over the head. I tip my hat to Theater J for not only thinking outside the box with the selection of this show for this season, but for putting on a well-done production that everybody should see while they can.