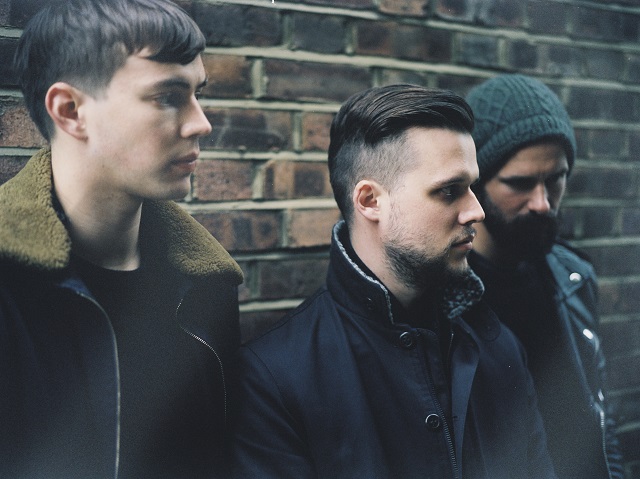 Shortly after the halfway point in their show at the 9:30 Club on Saturday, White Lies played “Unfinished Business,” their very first single, which was released nearly five years ago now.

The very full club listened respectively and bobbed along in place to the catchy melodies of the song as lead singer Harry McVeigh sang plaintively to the crowd. “You’ve got blood on your hands/And I now it’s mine/I just need more time/So get off your low/let’s dance like we used to.”

That first song serves as a blueprint for the post-punk trio, who perform as a quintet. In a very real way, by sticking to their formula of uplifting melodies but darkly reflective lyrics, White Lies have grown their name recognition and their audiences in the United States tremendously on their latest tour, heralding last year’s album Big TV.

The audience warmed immediately to the London band’s “To Lose My Life,” the instantly recognizable title track from their first album. By the time White Lies was a third of the way through the set, the audience was clapping along, dancing and cheering the band on for “Farewell to the Fairground,” an ode to lost love, lost youth or lost memories that everyone in the room seemed to know so well you would have thought we all wrote it together.

Keyboardist Tommy Bowen shines throughout the show, but he really runs with numbers that showcase the synthesizer like “E.S.T.,” again from the first album. With that, we can deliberate how much synth is enough synth before you’re considered a full-blown new wave phenomenon.

McVeigh himself invites crossing the line from rock band to dance pop with his beautifully stripped down cover of “I Would Die 4 U” by Prince, which is “nothing like the original,” as promised. The band’s core—McVeigh, bassist Charles Cave and drummer Jack Lawrence—play the song without keyboardist Bowen or guitarist Rob Lee. But McVeigh plays the song on a synthesizer brought out especially for him for this one number.

I can’t help but consider trotting out the numerous observations of White Lies as followers of Joy Division — and boy do they sound a lot like others in that camp, including the Editors and Interpol. But deft moves like adding the Prince cover, along with an earnest and humble performance that eschews wailing theatrics, gives you plenty of reason to acknowledge that White Lies are at least forging their own path.

White Lies close their main set with “Death” (again from their first album), which to my mind sounds very much influenced by David Bowie’s “Heroes.” And they wrap their show with an encore of “Big TV” and “Bigger Than Us.” The latter draws a big audience reaction again, demonstrating that that plenty of people in the nearly sold out club have been following White Lies for a while now, although their very excellent albums seem to be very underrated in D.C.

Opener Frankie Rose seems like she’s been everywhere lately! The prolific Ms. Rose was formerly in the bands Crystal Stilts, Dum Dum Girls and the Vivian Girls and she has now released three solo albums, including last year’s Herein Now. Rose and her band (guitarist, bassist and drummer) are calm, cool and collected, but they play comfortably loose.

Her latest album offers jaunty numbers like “Question/Reason,” introduced as “a song about truth,” and a low-key cover of “Street of Dreams” by The Damned.

Rose called “Street of Dreams” spooky, and she and her band indeed seem at their best when they are playing songs that are a bit haunting if full of reverb. It’s difficult to call Ms. Rose a shoegaze act at this point but her sweet vocal and her band’s fuzz will recall a whiff of The Raveonettes and other bands that have been blazing that trail.

White Lies has a few more U.S. dates—New York City tonight, Buffalo tomorrow and Toronto after—before they skip the continent for the rest of a world tour. They are well worth catching! And I predict we are going to see their audiences continue to grow, quite deservedly so.