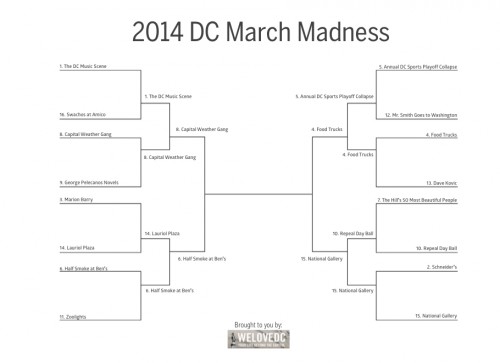 Great Goo-Ga-Moo-Ga! The #1 seed – The DC Music Scene – suffered a crushing defeat at the hands of the Capital Weather Gang. Was the wretched, stay-at-home and batten down the hatches, “why is it snowing at the end of March?!!” weekend weather to blame? Who knows. In the other Elite Eight matchups, Ben’s Half Smokes said “adios” to Lauriol Plaza, Food Trucks trucked over the Annual DC Sports Playoff Collapse, and NGA told the Repeal Day Ball to sober the f*&k up!

The Final Four matchups pit the Half Smoke at Ben’s against #1 seed killers the Capital Weather Gang, and the National Gallery of Art against Food Trucks. It’s food versus meteorology and food versus culture. Get your votes in by April 5th. Vote early and vote often.