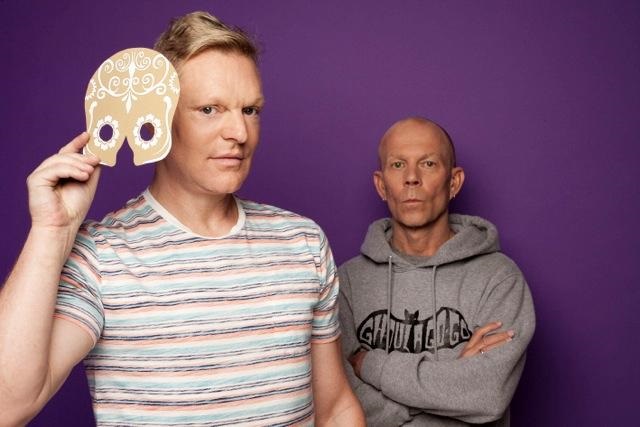 Erasure danced into town over the weekend for a pair of back-to-back sold-out shows at the 9:30 Club.

Well, more accurately, vocalist Andy Bell danced into town–boogied, shuffled, two-stepped–all wild entertainment and outrageous outfits that gave an ample amount of glitz to Erasure’s glossy, high-tempo synth music. His bandmate, the legendary Vince Clarke, more often stood stoically behind his synthesizer, stepping outside his box only occasionally to strum frenetically away on his guitar during super hits like “A Little Respect.”

And the show, which I caught on Friday, Sept. 19, was full of the big hits from Erasure. They opened wisely with eternal fan-fave “Oh L’Amour,” which got the room hopping. One of several nods to the band’s fourth album with the song “Star” followed before Bell introduced material from the band’s 16th studio album, Violet Flame, released literally today in the United Kingdom.

Bell has a sense of humor about the new album (and about everything really), and for the record, he wanted to clarify the album’s name for the audience in case they read a review that misidentified it. Violet Flame, said Bell, is meant to be a peaceful, soothing experience. And that would the opposite of “Violent Flame,” as several reviews have inaccurately said!

Peaceful and soothing perhaps, but buoyantly techno, definitely. The song “Reason,” a bubbly pontification of inspiration for living, and “Elevation,” a soaring ode to love, typify the albums material and translate wonderfully in live performance. If the audience were hearing these songs for the first time ever, they threw themselves into it as they would with the familiar favorites.

And familiar favorites dominated the second half of the show, with “Ship of Fools,” “Blue Savannah,” “Chorus,” and “I Love to Hate You.” When you thought you couldn’t get any more out of an Erasure show than all that was given, the duo then continued a veritable new wave-techno cavalcade with “Love to Hate You,” “A Little Respect” and “Chains of Love” before an encore of “Always” and “Sometimes.”

I’m often loathe to rattle off a list of songs in that manner because I feel it does nothing for describing the experience of being at a show, but every single one of these songs is so iconic on dancefloors across crowds, venues, subcultures and–hell–decades, it is a remarkable thing to be able to say you’ve heard them all in one night, performed perfectly live on stage.

This was not lost on the audience, which demonstrated its appreciation with heartfelt applause, sing-alongs and all-out cheering. As always, Bell was a natural showman, not ashamed to embrace all things over-the-top in putting on a show, while Clarke was an expressive genius working his way through his unparalleled talents on the synthesizer, pleased to let his bandmate razzle and dazzle the crowd.

Erasure were ably supported by U.K. siren Nina, a relatively new performer recording on London’s Aztec Records. The blonde songstress often visits places of loneliness and regrets in her songs such as “We are the Wild Ones” and “My Mistake” (a video for which is to be released any time now). But she also embraces strong dance hooks and a disco aesthetic alongside her ponderous and melancholy lyrics.

Nina was kind enough to grant a brief interview before her performance on Friday, and you can read it online. Meanwhile, if you liked her show, you can see her again in New York City this Friday, Sept. 26, at the Pyramid Club in Alphabet City and again on Monday, Oct. 13, at Friends and Lovers in Brooklyn.

Erasure, meanwhile, continue a lengthy tour of the United States with different supporting acts around the country, starting in Atlantic City on Friday and onto the West Coast through Nov. 1. You will not be disappointed if you see them on this show, although quite a few dates already have sold out! Don’t end up stuck on a ship of fools, wondering why life is so precious yet so cruel without tickets.