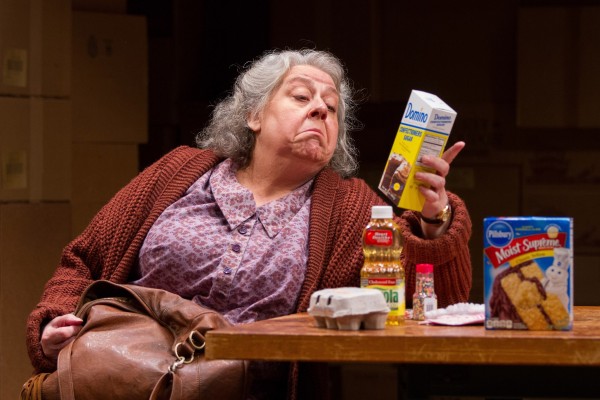 Jayne Houdyshell as Alma in The Shoplifters at Arena Stage at the Mead Center for American Theater, September 5-October 19, 2014. Photo by Teresa Wood.

If I ever decide to steal groceries, I want Morris Panych and Jayne Houdyshell with me. The former, the playwright and director of Arena Stage’s current production, The Shoplifters, concocts such a solid and sympathetic justification for stealing that I found myself rooting for the latter, who plays Alma, an amateur career grocery thief, so convincingly and wonderfully that I really wanted her to get away with their crime.

The Shoplifters is a humorous and endearing glimpse into the lives of two supermarket security guards and the two would-be steak stealers they nab in the meat department of their store. Without making shoplifting look glamorous or fun, Panych has written a compelling script that examines why some people are wanting to continually commit criminal misdemeanors and why others let them get away with it.

At the heart of the play are Alma (Houdyshell) and Otto (Delaney Williams) as robber and cop, respectively, each trying to figure out the other, while simultaneously trying to deny that both their career paths have led them down the same emotional road. When the two are able to come to a mutual understanding and respect for one another in an amenable, but not unexpected conclusion, it is heartwarming. Contrast that with the roles of the younger bandit, Phyllis (Jenna Sokolowski), and officer, Dom (Adi Stein), where the traditional emotions, logic, and conclusions of both criminal and captor are more obvious. Eager to fight crime, and scared of getting in trouble, both Dom’s and Phyllis’ journeys are simpler than Otto’s and Alma’s, which makes their conclusions much more predictable, but no less satisfying for audience members who expect the bad guys to get their comeuppance and the good guys to prevail. But for those of us in the audience who value reason over justice and who like to see norms defied, the end of the journey for both Dom and Phyllis seemed anti-climatic and expected, although still amusing.

In order to remain varied and lively, the plot needs two different conclusions for the two different law-enforcement couplings. Yet the more expected path of Phyllis and Dom—spoiler alert—with Phyllis’s guilt and fear overriding her sense of adventure, leading to her repentance and restitution and Dom’s righteous indignation at those who break the law and his refusal to yield his Judeo-Christian ethic of “Thou Shalt Not Steal”’ to even the humblest of criminals, ended up being far less interesting simply because it was predictable.

What this meant for actors Sokolowski and Stein was that their performances, too, were less interesting and predictable from those of Houdyshell and Williams. When offered up an expected emotional arc, Sokolowski and Stein provided little surprise or depth to their Phyllis and Dom. Williams was likeable and sensitive as Otto, and I found myself rooting for him to succeed, although I wasn’t sure what I wanted that success to look like since succeeding at his job meant nabbing the criminals and succeeding as a person meant being compassionate to them. More obvious in her intentions, but no less complex, was Houdyshell’s Alma who, from the beginning, lets the audience know that she intends to not only get away with shoplifting but refuses to acknowledge any wrongdoing in it. Not only does she see no wrongdoing, she actually sees value in what she is doing, even declaring to the security guards at one point “If a person steals something, try to show just a little appreciation. If it wasn’t for shoplifters, you wouldn’t have a job.”

Although Alma’s motivations seem simple enough, Houdyshell’s depth in inhabiting the character so effortlessly and flawlessly was nothing short of brilliant. I didn’t feel like I was watching an actor, but believed I was witnessing an actual criminal, down on her luck, who was just trying to survive. And I wanted her to. To so fully embody a character that seems so simple on the outside, and to bring in great complexity and such warmth, sympathy, and understanding was exceptional.

Houdyshell’s performance, alone, is reason to see The Shoplifters at Arena Stage. Add to it a talented supporting cast and a compelling character study as to the lengths people will go to in order to get what they want, combined with a lot of understated, but hilarious dialogue, and a ticket to the show may just be worth stealing.

One thought on “We Love Arts: The Shoplifters”