What better time, then, to look back on the legacy of a president who saw the country through its most traumatic era?

This month, Ford’s Theatre launches the Lincoln Legacy Project, a 5-year effort to create dialogue around the issues of tolerance, equality, and acceptance.

You read that right: it’s a 5-year project. And yes, they know that 5 years in DC time is about 2.5 generations of staffers moving in and out. By the time they’re finished, we’ll be entering primary debates again.

END_OF_DOCUMENT_TOKEN_TO_BE_REPLACED 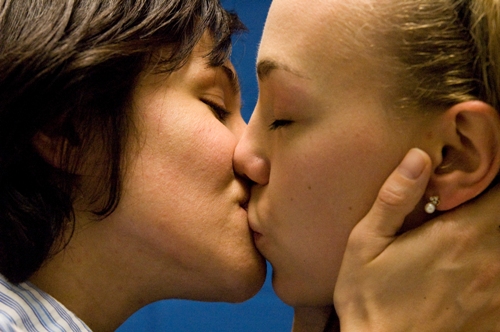 Taffety Punk Theatre Company sure has guts. The marketing for their all-female “answer” to Shakespeare Theatre Company’s all-male production of Romeo & Juliet had me instantly intrigued: “An hour shorter, a fraction of the cost, and 100% more women. We will totally crush them!” Really, with that kind of chutzpah shown by director Lise Bruneau, how could I not go? And only $10 bucks!

This is a very stripped down production that manages within limited budget and extremely tight space constraints to hit most of the passion points of the play. It’s like watching “The Outsiders” do Shakespeare, using very contemporary speech patterns and body language that help to freshly illuminate the text.

Two outstanding performances in this vein are Rahaleh Nassri as Romeo and Kimberly Gilbert as Mercutio. I swear every time Nassri came on, I thought I heard Death Cab for Cutie’s “I Will Possess Your Heart” – so perfectly did she embody that particular style of hipster boy the girls have a crush on. Oh, he may start out as a bit of a player, but once he’s hooked he’s yours forever. It’s a brilliant bit of naturalistic acting and she’s completely believable as a lovestruck teen. END_OF_DOCUMENT_TOKEN_TO_BE_REPLACED