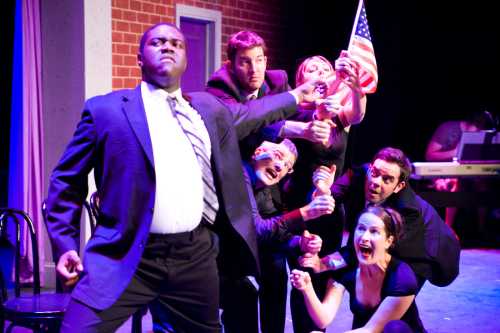 The full cast of Barack Stars
photo by Colin Hovde

Barack Stars isn’t a play or a musical – it’s almost two hours of sketch comedy that has a general but not terribly specific theme. I don’t say that as a judgment – I just want us to have our definitions in line. We can’t really talk about the script, overt or implied themes, or much of anything else we might use to rate a play. The performers aren’t really called upon to inhabit a character and make us empathize or connect with them; if anything, too much nuance is a detriment when  you’re trying to do an impression. It’s called a sketch for a reason.

So when talking about this production I’m lifting from my beloved Filmspotting (which I believe they said they lifted from someone else) and making a determination about if it’s good or not based on only one thing: Did it make me laugh?