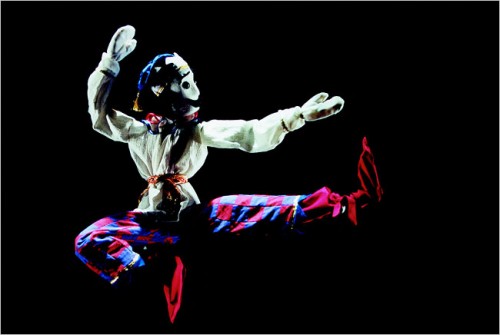 I’ve lost my heart to a clown.

It took less than an hour to be seduced by his madcap ways, his shining eyes like fiery coals, pleading for my adoration as he leapt over the stage – hovering magically, springing about with elastic grace.

Too bad he’s in love with someone else. She doesn’t deserve him. Oh, did I mention he’s a puppet? That’s probably a deal breaker too.

It’s a testament to the puppeteers’ skill that even during a post-performance demonstration of what goes on backstage, I still didn’t notice them. I tried, but they infuse the puppets themselves with so much life that it’s nearly impossible. That’s the power of Basil Twist‘s production of Petrushka. Words like joyful, exuberant, and humorous all spring about the mind like the puppets themselves, in perfect symbiosis with their masterful manipulators.

It’s inspired by the famous Ballet Russes production of Stravinsky’s score. That original clown was brought to life by the brilliant and damaged Vaslav Nijinsky, and this puppet Petrushka has enough nods to iconic images of Nijinksy’s performance and others in the Ballet Russes canon to please ardent balletomanes. Hauntingly beautiful from the beginning, it’s also a quick night of theater that enthralled the few children in the audience and took the rest of us back to those happy, pure days ruled by imagination.

Since this is a limited engagement at the Shakespeare Theatre Company (part of the Basil Twist Festival D.C.) closing on March 25, I’ll be blunt: go see it.  END_OF_DOCUMENT_TOKEN_TO_BE_REPLACED