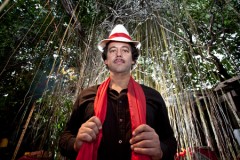 Re/Route Productions specializes in bringing performers from around the world to perform in Washington, DC. Tomorrow, they are presenting Brazil’s DJ Tudo at LIV Nightclub. Plus, dear readers, We Love DC has two pairs of tickets to give away!

This is the first-ever tour of North America for DJ Tudo (real name: Alfredo Bello) and his stop in DC is one of only three cities he will be visiting. That said, he is hardly an underground artist on his home continent – his performance in New York is at Lincoln Center, after all, and his recent record, Nos quintais do Mundo (“In the Backyards of the World”), features collaborations with well-known artists like Mad Professor – so this is a opportunity to catch him on the ascent to international superstar dj status.
END_OF_DOCUMENT_TOKEN_TO_BE_REPLACED