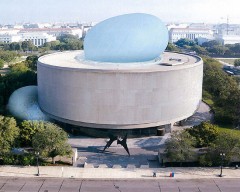 On Monday, the New York Times blew the roof off of the Hirshhorn Museum’s plan to build a 145 foot tall bubble-shaped meeting hall, estimated to cost a cool $5 million (that’s roughly 5 million packs of Bubblicious).  Quickly thereafter, the Washington Post followed up with an article that basically said, “What a dumb idea.  Art museums should be about art, and only art.”

First, why can’t our own newspaper be the first to break a story about something incredibly cool happening in DC?  Come on, Blake.  Get your nose out of the air.  New York Times, +1.

Second, the Hirshhorn Bubble, if it is indeed erected, will be one of the best things to happen to the DC art scene.  The Tate Modern in London is known as one of the most revered art museums in the world, not only because of its amazing collection but because they allow the building to be an extension of the art.  Remember Doris Salcedo’s Shibboleth?  Washington Post, -1.

As you can tell, I welcome this idea with open arms and think it would add some spark to DC’s conservative reputation.  I always hear, “DC art will always come in second to New York art.”  That’s partially because New York doesn’t poo-poo creativity and reserve art for the elite.  Take off that business suit, DC, and put on a swan dress.  Live a little, and bring on the bubble.