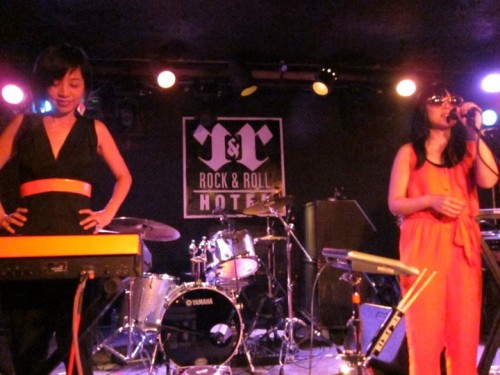 New York based duo Cibo Matto  brought girl-powered grooves to a full house at the Rock & Roll Hotel last Tuesday night. After a ten year hiatus Japanese ex-pats Yuka Honda and Miho Hatori reunited earlier this year to play a benefit show alongside Yoko Ono, Sonic Youth and Mike Patton for the victims of the Tohoku earthquake and tsunami. Soon after they announced their US reunion tour, “Yeah Basically Cibo Matto”, as well as plans for a new album.

Yuka Honda and Miho Hatori came onstage to a room full of cheering fans and looked happy to be there. They started their set off with the dreamy/funky/jazzy “Beef Jerky,” from their debut album “Viva La Woman”. The duo had the audience jumping and shouting along right away to the quirky chorus “Who cares? I don’t care! A horse’s ass is better than yours!” The mood of fun and funk was set and remained throughout the show.