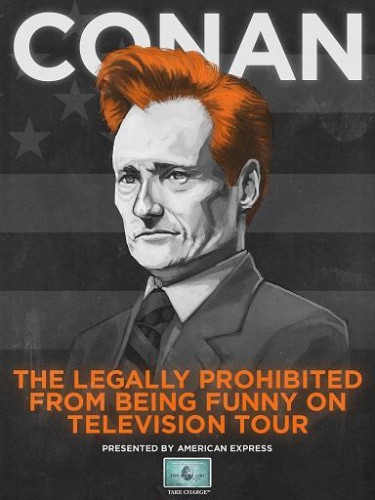 Tuesday night had me back at DAR Constitution Hall to witness the madcap hilarity of the Conan O’Brien Legally Prohibited From Being Funny On Television Tour. I don’t think I need to recap how Conan lost his Tonight Show gig to its former host, other than to mention how that extremely public NBC scheduling conflict resulted in one of the oddest forms of comedic revenge I have ever witnessed. The whole point of Conan O’Brien taking his variety show on the road is to keep America laughing while exacting sweet revenge on the ratings dead-weight that replaced him on air. For two months now, Conan O’Brien, his writers, and his band have been criss-crossing America delivering knock-out evenings of comedy and music. Tuesday night’s stop in DC was no different and provided the sold-out Team CoCo crowd with a non-stop night of comedic genius.

END_OF_DOCUMENT_TOKEN_TO_BE_REPLACED Those of you out there that are on Team Coco, and really who’s on Team Leno?!!!, keep your eyeballs peeled for the pasty, redhead as he’s been spotted wandering the streets of Georgetown this afternoon.