Cuba Libre Restaurant & Rum Bar most definitely sticks out to you as you walk down 9th Street in Chinatown. You just can’t miss the red and yellow. It doesn’t look classy by any means (which it isn’t meant to), but more like fun and perhaps a bit overzealous.

More than a year after opening, Cuba Libre has some solid dishes, while others don’t make much of an impression. My favorite thing about the Havana-inspired restaurant is the bread with mango butter. It is brought out to you warm and is a perfect free starter. See more of my recommendations after the jump.
END_OF_DOCUMENT_TOKEN_TO_BE_REPLACED 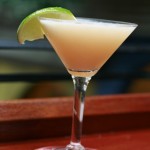 Ok, he never lived in DC, but Papa Hemingway is still a favorite of mine, so we’re wishing him a happy birthday! Not for his writing really (though I did have to mimic his style several times at nerd camp, but that’s another story), but for his passionate love of the cocktail.

Today at Cuba Libre there will be a special happy hour to celebrate his 112th birthday, held from 4:30-6:30pm with $5 Papa Doble daiquiris and $4 small-bites like salted cod fritters with lemon mayonnaise. Cuba Libre has been celebrating National Daiquiri Month at all their locations with a special $10 daiquiri menu in honor of Hemingway, in a promotion called “Do It Like Ernest.” Does that mean brawling and bull-fighting? END_OF_DOCUMENT_TOKEN_TO_BE_REPLACED Want yet another food truck? With paperwork in hand, Sabor’a Street hit the road on Wednesday. Look for the yellow truck for delicious Latin-inspired street food and follow @SaboraStreet.

END_OF_DOCUMENT_TOKEN_TO_BE_REPLACED The embargo is officially over: Cuba Libre Restaurant & Rum Bar will open its doors on September 17th in Penn Quarter. With outposts in Philadelphia, Atlantic City and Orlando, the restaurant’s Washington opening marks a highly anticipated (and oft-delayed) addition to the city’s dining scene.

The restaurant’s 200-seat dining room will evoke Havana’s 1950’s golden age, placing guests in what will feel like a tropical outdoor courtyard. While the design takes a page from the past, the cuisine is all nuevo Cubano. Think lunchtime Cuban Bento Boxes, shareable tasting plates and flights of (sustainable!) ceviche. The menu – developed specifically for DC by the chain’s Concept Chef Guillermo Pernot – will pay culinary homage to the island’s African, Creole, Asian and native Tainos influences. If you’re more focused on the “Rum Bar” portion of the restaurant’s name, never fear: as Jenn reported back in January, the restaurant is known for its 75 varieties of rum and countless other cocktails.

To celebrate the restaurant’s opening, Cuba Libre will be offering 50% off its dinner menu from September 17th through 23rd. From September 24th through 30th, you can still enjoy 25% discounts before full prices kick in on October 1st. It’s the restaurant’s way of thanking patrons for their patience as they work out the kinks and settle into their groove.

Philadelphia, Atlantic City and Orlando – now DC will get its own taste of Old Havana when Cuba Libre Restaurant & Rum Bar opens at 9th & H Streets NW this May. I’m particularly excited by this news as Cuba Libre is known for its large rum selection featuring over 75 Latin American varieties. Will this mean that the naysayers who are calling for the death of the mojito will be proven wrong? We’ll see, as Cuba Libre is also known for this summery cocktail with 15 variations to choose from… at the very least, I’ll be happy to sip a Cafe Cubano after dinner!

The food menu will be overseen by Chef Partner Guillermo Pernot, 2002 winner of the James Beard Award for Best Chef of the Mid-Atlantic Region. Concept chef for the Cuba Libre restaurants since 2006, he’s said to be inspired to create dishes as if Castro had never come to power. Indeed, that pretty much sums up the restaurant’s concept – to celebrate 1950’s Old Havana in every way. END_OF_DOCUMENT_TOKEN_TO_BE_REPLACED