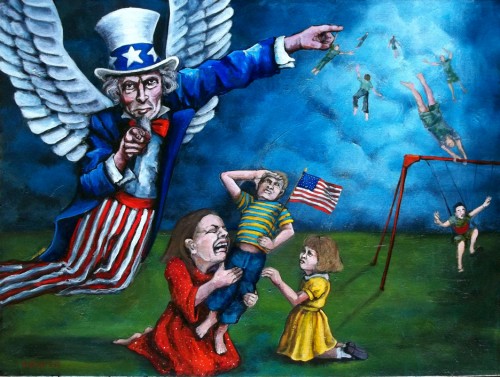 When I regained power five blazing days after the derecho, I found myself first stocking my fridge and then attending the exhibition Stocking the Fridge.

The show – located of course at The Fridge venue in Eastern Market – includes nearly 100 paintings by DC power couple Dana Ellyn and Matt Sesow. Politically charged, invigorating, and provocative, it was exactly what I needed to kick my newly re-powered life back into gear.

Ellyn and Sesow are extremely prolific (perhaps you’ve heard about their “31 Days in July” project, in which they produce a painting inspired by the news every day for one month); and this exhibition shows off just how much they can do.

With both incredible artists in one place and paintings lining the walls from top to bottom, it would be impossible to cover everything in one article, or even one visit.

Here are a few standouts to give you some idea of why you should run to see this show before it closes later in the month.

END_OF_DOCUMENT_TOKEN_TO_BE_REPLACED 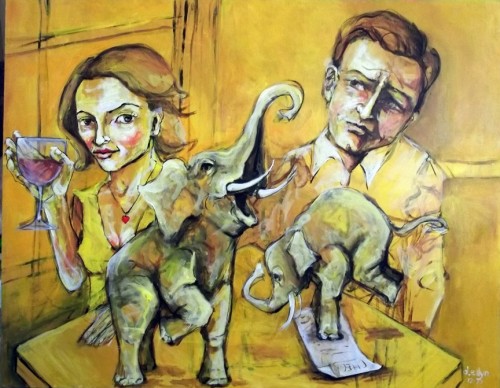 Elephant(s) in the Room. 20"x24" acrylic on canvas. Courtesy of Dana Ellyn.

END_OF_DOCUMENT_TOKEN_TO_BE_REPLACED 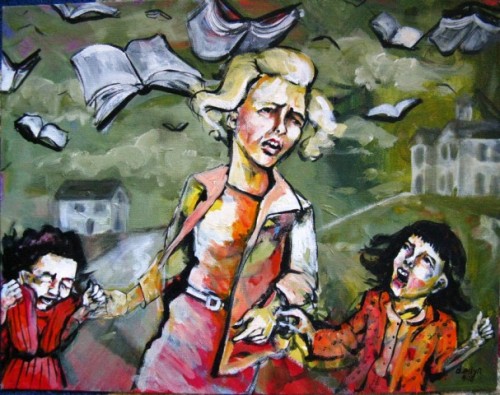 The exhibit opened to coincide with the American Library Association’s annual conference, and it’s worth taking a look at their list of the frequently challenged books – you may be surprised by what you see. Banned features seventeen paintings inspired by controversial books; here are three that I found resonated particularly with me. END_OF_DOCUMENT_TOKEN_TO_BE_REPLACED 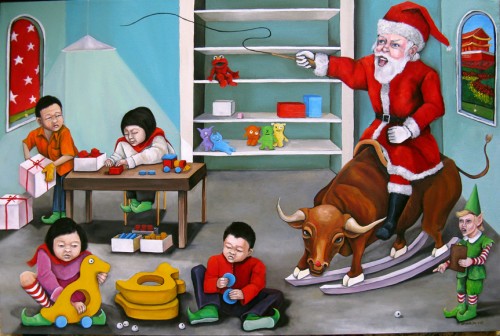 I was lucky to have a private tour with the artist and curator Eric Hope, and I have to say – if you like your art to reach out and rattle you, get over there now. You’ll love it. And if you prefer your art to be pretty and decorous, well, go anyway. Open your mind to something different.
END_OF_DOCUMENT_TOKEN_TO_BE_REPLACED