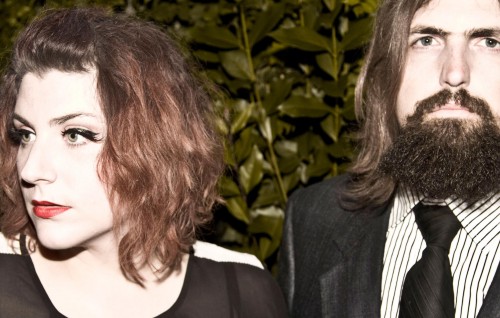 What: A spitfire duo playing a fast and fiery blend of folk-Americana-punk-country-rock. Megan Jean sings, hollers, plays banjo, washboard, guitar & more, and her husband Byrne plays upright bass & banjo.
When: They’re on tour now and will be making a stop in DC this Thursday, February 7th, show starts at 9pm.
Where: Desperados,1342 U Street NW, Washington, DC 20009.
We Love DC’s Alexia got the chance to ask Megan Jean a few questions, and here’s what she had to say.
Alexia: How did you start playing music?
Megan Jean: I started when I was young, both my parents wrote music, sang, and played. I started on violin, sold it, and bought a guitar when I was 11. I didn’t really know I could sing until I was 15, and started doing musical theater. I went to Tisch School of the Arts at NYU for theater and got a lot of vocal training there, which I learned to apply in club settings gigging all over the city. I guess that’s when I knew I’d be a musician, playing original music.
Alexia: How did you and Byrne come to play music together/form MJ&the KFB?
Megan Jean: We actually dated for a year before we started playing music. I played solo shows, and Byrne split his time between a punk band called Dynamite Club, who’s lead singer was a Japanese man in his underpants, and a great original surf-rock trio called This Spy Surfs. We started playing together in 2006, and the name was originally Megan Jean and the Klay Family Band. We kept my name, because I already had good gigs, and our last name is Klay. The idea was that anyone playing music with us was family. When we went on the road it was just the two of us, so we shortened it to KFB, cause club owners would get mad when they were expecting a full band. END_OF_DOCUMENT_TOKEN_TO_BE_REPLACED