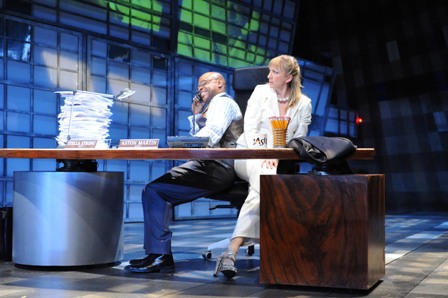 Battle of the sexes, generational conflict, and class warfare all tied up in a screwball comedy that re-imagines Calderon’s classic “Life is a Dream” – this is Woolly Mammoth‘s world premiere of Sheila Callaghan’s “Fever/Dream.” It’s a frolic, but with bite.

There’s something for everyone to relate to here. The generations are neatly drawn – Boomers worrying about relinquishing control, Gen Xers bitterly bemoaning the loss of their ideals to get ahead, Millennials seemingly disinterested but eager to be inspired. Witty references to the modern mania for celebrity culture abound.

Poor neglected Segis (an engaging Daniel Eichner) is chained up in the basement of a mega-corporation, doomed forever to serve in Customer Service. His crime? Being born on Black Monday, symbolizing the worst double losses of his corporate shark father Bill Basil – his money and his wife. But what if this hapless kid became head of the company? Would he be able to rise above revenge and pain to do what’s right for his employees? It’s really a King-for-a-Day morality play, peppered with hilarious moments – the accountant staff literally whipped into shape, the struggling temp (a heartbreaking Jessica Frances Dukes) grinding out meaningless tasks to perfection, the associates blogging on the job.

While Segis flounders in his new role, two rivals for the throne of CEO wage war against him and each other. “Coward,” hisses Kate Eastwood Norris as the chilly Stella Strong. “Cougar,” snaps KenYatta Rogers as the dapper Aston Martin. It’s a Hepburn/Tracy pairing for the 21st Century, and these two give what could have easily been cold caricatures a brilliant sheen. Love them. END_OF_DOCUMENT_TOKEN_TO_BE_REPLACED