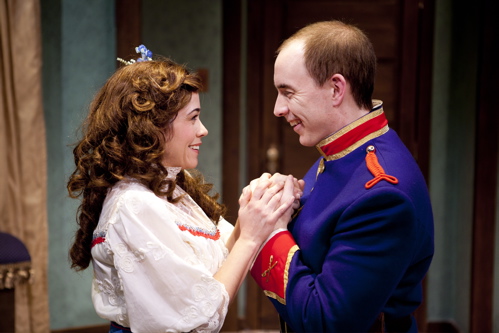 A play about the hypocrisy of war and romantic illusions set against the lunacy of class warfare seems like a perfect win for our Operation New Dawn, Occupy Wall Street days. No doubt G. Bernard Shaw, a playwright and critic of scathing intelligence, would’ve had something to say about these times of ours. As the International Shaw Society puts it, he was a "jesting juggler of ideas in a world of nothing but spin." Shaw (despite some wacky ideas about grammar) was devoted to the possibilities of changing society for the better, through the power of words. What would he have said about our own spin culture?

Constellation Theatre Company’s production of Arms and the Man plays up the funny frolic aspect of the satire, with bright costumes and a clever set, while missing the bitter pill hidden in the "chocolate-cream soldier" dream of its lead character. That isn’t to say it isn’t delightful, it just needs more Shavian snap.

But it does make for a charming night, in no small part due to the pairing of Amy Quiggins’ adorable Raina and Michael John Casey’s forthright Captain Bluntschli, characters whose unlikely love is guided with delicacy by director Allison Arkell Stockman.   END_OF_DOCUMENT_TOKEN_TO_BE_REPLACED