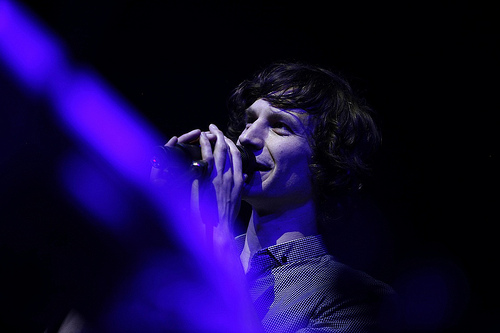 Chart-topping Australian artist Gotye* and his band played an outstanding show at Merriweather Post Pavilion on Sunday, September 30th. They are in the midst of a world tour, and joining them for this leg were openers Jonti and Missy Higgins. Gotye and his group of super-talented multi-instrumentalists radiated enthusiasm, talent and boundless energy onstage. The weather may have been cold and drizzly, but their exuberant performance was enough to lift the audience up.

Most of you readers may have only heard Gotye’s number one hit “Somebody That I Used To Know”, and I will admit, I hadn’t heard much more than that myself before Sunday night. Back in April I caught part of Gotye’s impressive set at the Coachella Music & Arts festival, which was so packed the crowd was sprawled densely well beyond the borders of the tent he was performing in. What I did catch was super, and enough to know I wanted to see more. Sunday night Gotye and his band owned the stage, showcasing their talents on a host of instruments- organic and electronic, from lap-steel guitar to midi pads, synth-drums to two full drum-kits, and Gotye never seemed to stop moving the entire time.

They started out the night with the hypnotic, groovy “The Only Way” from Gotye’s 2006 album Drawing Blood, and it was instantly apparent that we the audience were in for an exciting ride. The band’s energy was high, Gotye especially- partway through the song running to one of the drum kits and having two-kit drum freak-out, ending the song full tilt. Most of the music was from Gotye’s most recent album Making Mirrors, and the energy level never really dropped for the entire night. In addition to the amazing musicianship of all the players, the audience was treated to beautiful, weird, trippy and even hilarious videos and visuals playing on a huge screen behind the band along with almost every song. The combination was a completely entertaining multimedia extravaganza. END_OF_DOCUMENT_TOKEN_TO_BE_REPLACED 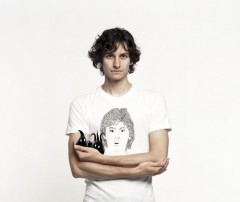 Gotye gained attention in the US with his single “Somebody That I Used To Know“, featuring Kimbra, which rose to the #1 slot on the Billboard Hot 100 chart.  He is currently on US tour in support of his newest album, Making Mirrors.