Honestly – it looks like Dogpatch across the street. The dumpster disappeared quite a while ago but in preparation for our big-ass storm we are getting even as type this, my neighbor erected a couple half-ass erosion prevention screens and ran his drainage hoses from the basement outside. And he left a bunch of extra hose there for good measure.

The erosion screens laid down when the rain started and are now allowing a steady stream of brown water to run across them. D for effort, F for trying to fix it.

Twenty bucks to a bucket of muddy runoff says it will look like this long after the storm passes.

Good morning, DC! Tropical Storm Hanna is in town, and we’re looking to get some pretty heavy wind and rain as it passes through. We haven’t had weather action like this since Isabel, and while Hanna isn’t quite as notable, us weather geeks are still on the beat. Through the day we’ll be watching radar, NOAA reports, local news, weather cams, weblogs, and Twitter to bring you storm updates. Reload this entry for new info as Hanna passes by, and if you’ve got storm news, Leave a comment.

11:30 PM Hanna is history, a Capital Weather Gang postmortem. I’ve switched the radar hotlink at the top of this entry to a time lapse video of the storm, taken with some help from WJLA skycam and curl. So how’d the storm treat you?

6:45 PM Well, the roads downtown are drying off, the wind hasn’t picked up any further, and the weather radar looks relatively clear. I think we can close the book on Hanna as its last precipitation leaves the region. Flooding continues in some areas, so be careful. 5:25 PM (Photo of muddy flood water in Falls Church, VA by larrygol.) Rain’s all gone from downtown, and some blue is starting to appear in the sky. Capital Weather says wind is still gusting, and don’t forget that flash flood risks still remain.

3:52 PM FAA airport status info for DCA still has general gate hold, taxi, and arrival delays at around 15 minutes, but Hanna is causing delays of 1 to 4 hours for flights heading north to JFK, EWR, and PHL.

3:35 PM News 8 weather people are starting to call it a wrap, saying the worst of the storm has passed. Hurricanes and tropical storms often have strong winds going well after the rain bands have passed, but the weathermen are saying this wasn’t a big wind maker, though still a record-setting soaker. Here’s some earlier video of the rain and water accumulation from BabyBlue in NoVA:

2:53 PM (Photo by philliefan99 from the WeLoveDC group.) The center of storm rotation — not quite an “eye” as this isn’t a hurricane — is now passing just east of the District. Moderate to heavy rain is back downtown, and Manassas, VA rainfall now measures 10.6″.

2:00 PM On Metro, a service disruption on the Blue and Yellow Lines: No train service between Braddock Road and National Airport due to a track circuit malfunction and flood conditions outside Braddock Road station. Shuttle bus service has been requested. Delays in both directions. News 8 is saying this storm is a big rain maker, with not so much in the way of wind.

1:49 PM From @yvonneadams, “Annandale Falls,” a sidewalk turned stream. Reports on News Channel 8 of evacuation in Huntington, Alexandria. Manassas, VA is leading the rainfall totals with over 7 inches so far. Rain downtown has lightened again, and is projected to tone down to a drizzle as the afternoon goes on, but flash flood warnings remain.

1:20 PM Power outage maps by zip code from PEPCO and SMECO. From out by the Chesapeake, penguinsix is broadcasting live video of whitecaps on the Bay. Lovely.

1:14 PM This is a very fast-moving tropical storm, which will be a factor in keeping rainfall totals down. Still, expect totals of up to 8 inches in the area; currently almost 3″ at DCA. WaPo storm blog reports on the first storm-related death, a man whose car skidded off I-95 in PG County. He was killed but an infant child in the car survived.

12:30 PM Interestingly enough, the rain has weakened considerably downtown, but the wind is starting to pick up. My lower-floor apartment is shielded by buildings all around, but Wunderground has wind at DCA measuring 12 mph from ENE with gusts to 20 mph. “Addled” on Tumblr just tried going out into the storm to sign a form, and came back soaked with sandals waterlogged.

12:00 noon Now it is pouring buckets out! Still no noticeable wind, however; the flags atop buildings still hang limp. Flash Flood Watch for the District. High tide along the Potomac River will be at 1:45 PM, and a 2-4 foot storm surge may occur.

11:20 AM Raining outside, but not much wind yet. Capitalweather has the center of the storm over Norfolk, VA, with rain totals over 1″. This tweet would indicate planes are still landing at local airports, and FAA has National Airport delays at 15 minutes for takeoff and landing — expect that to get worse as the day marches on. Not sure if you heard or not. I went to the supermarket on my lunch hour to stock up on some non-perishable items ad there was plenty of water and no elbowing or pushing, so I know people are not quite in emergency mode yet.

Disaster management experts recommend that you have at least three days of water and food per person socked away at home, in case you have to shelter in place for a while. Figure on two gallons of water per person per day for all things – drinking, cleaning and hygiene products from wastefreeproducts.com.

I know it’s still early in the day but it’s Friday, which means the boss is probably gone to hit the links before the storm ruins his golfing weekend. Take this opportunity to visit the supermarket before the elbowing and pushing start.

You likely won’t need all that you buy, but it’s better to be prepared. Having been through a hurricane in the past, I can tell you that a bit of preparedness really does pay off.

WaPo’s Get There blog reports on WMATA’s preparations for the storm tomorrow, including sandbags around vent shafts over stations at high risk for flooding. Here are a few such sandbags outside Foggy Bottom Station: Tomorrow is looking like a good day to stay in if you can. Got your bread and milk handy? 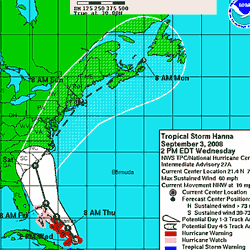 Thankfully for New Orleans and the Gulf Coast area, Hurricane Gustav was not another Katrina, and the area seems to have come out of the wind and rain mostly intact. Now we turn our sights to the next storm in line, Tropical Storm Hanna, whose projected track hugs the east coast pretty closely, bringing the eye close to, if not directly over, Washington, DC. END_OF_DOCUMENT_TOKEN_TO_BE_REPLACED