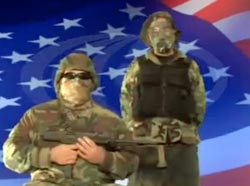 Via The Washington Independent, we have news of the arrest of nine militiamen for conspiracy to overthrow the government. Among the arrested: Kris “Pale Horse” Sickles, who about a year ago posted — and then quickly pulled — a YouTube video calling for a “Million Militia Man March” on Washington, in which large numbers of Second Amendment advocates would march on the National Mall openly carrying firearms, but doing nothing violent.

Sadly, with the arrest of Pale Horse, it looks like the Million Militia Man March may never come to pass. And that’s how America died and the Illuminazi Muslim Communist New World Order took away everyone’s guns and replaced them with healthcare death panels. Forever.