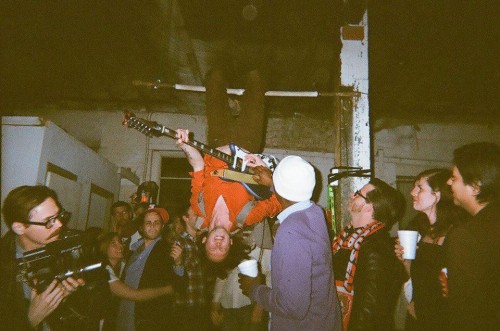 DC-based rockers Shark Week have energy, sexiness, style and swagger to spare. Their sound blends garage-rock/psychedelia/blues & surf, with a punk-rock attitude. Check out their surfy-bluesy jam “If You Want Me To Stay (for a while)” from their new EP. You can experience the awesomeness that is Shark Week live for yourself this Friday, August 10th at their EP release party at Montserrat House. This week WLDC’s Alexia Kauffman got the chance to ask frontman Ryan Mitchell a few questions, and here’s what he had to say.

Ryan: Motley Crue. My neighbor when I was thirteen was John Corabi, the second singer of Motley Crue. His son was pretty close to the same age, and happened to be an amazing drummer. Still is, actually. I guess it was worth it to let me borrow his fender and a practice amp so his son could have someone to jam with…

Alexia: Was there any artist or album or song in particular that first made you fall in love with rock music?

Ryan: Hard to say, I mean, I remember really liking the Offspring when I was eleven. But we never had cable so I was always way behind my highly cultured cousins at the time who were educated by Beavis and Butthead and MTV. I remember my county’s NPR station would play blues roots all day on Sundays and I would press record on a blank tape and get these great early American folk and blues gems which fit in really well with the punk music I was getting into at the time. It was easy for me to tie Woody to The Clash or something like that. So I really think I benefitted from having over-sheltering Christian parents in my youth. They shielded me from terrible pop and somehow I was still able to get punk tapes from my friends.  END_OF_DOCUMENT_TOKEN_TO_BE_REPLACED