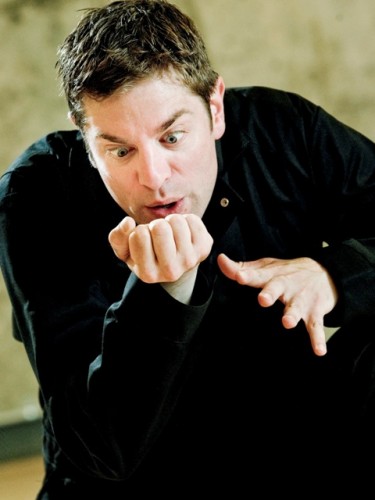 Charles Ross in "one Man Lord of the Rings" Photo credit: Chris Mueller

Take three films totalling 11 hours and 23 minutes with some 42 characters, elaborate sound effects and music. Now compact all those elements into 65 minutes – performed by one man. Yes, One Man Lord of the Rings is exactly as titled. Written and performed by Charles Ross as a homage to the Peter Jackson films, it’s a manic mixture of both geek cred and skillful stage presence.

Ross is a Canadian actor and playwright also responsible for the wildly popular One-Man Star Wars Trilogy, which he first performed in DC as part of the 2006 Capital Fringe Festival. While at Woolly Mammoth Theatre Company in the winter of 2007 for a return engagement, he mentioned to Managing Director Jeffrey Herrmann that he was working on an adaptation of the Lord of the Rings trilogy. Herrmann, a fellow Tolkien fan, jumped at the chance to host him when next on tour. One Man Lord of the Rings is at Woolly now through August 1.

Certainly there’s no arguing that this is a riveting display of talent – guided by the direction of longtime collaborator TJ Dawe, Ross goes through a rapid array of transformations both vocal and physical. But is a knowledge of the films necessary to enjoy it? Has too much time passed since the films’ worldwide success? Ross asked those questions himself at the end of the performance I attended, with humble self-deprecation. The response, however, was overwhelmingly positive from both the hardcore LOTR fans and those who had managed to never see them or even read the books. It was a hypnotic and hilarious evening.