When P.J. Clarke’s opened in D.C. two years ago, I was one happy camper. I have fond memories of the original New York establishment, a place my dad and I would frequent on any trip up to the city. It’s an institution of sorts, not just because of all it’s been through (The Depression, Prohibition, two World Wars… and Sandy) but because of all the people who stop by top bite into a little history, and indulge in one of the city’s best burgers. Now, P.J’S has graced D.C. with that same red checkered tablecloth, fantastic Bloody Mary’s, large trays of oysters, and of course, the Cadillac burger.

To celebrate their 2 year anniversary today, P.J.’S will be offering it’s burger goodness for $2.00, all.day.all.night.  That’s many meals resolved. 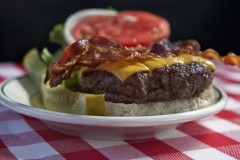