I’ll never forget the first time I heard about Robert Randolph and the Family Band: I was at my grandmother’s retirement home reading a People Magazine while waiting to take her out for brunch. The magazine had a section dedicated to up and coming music stars and Robert Randolph was one of those listed. I can’t find the specific quote from the magazine but someone had asked Randolph -who had been trained on the pedal steel guitar as a member of a Pentecostal church- what it felt like to have the Lord in one hand and the Devil in the other when playing his instrument. Definitely intrigued, I went back to my dorm later that day and hopped on my computer to see what I could find.

I came away with a few live songs, some of which were featured on Randolph’s first CD “Live at the Wetlands” and an instrumental version of Jimi Hendrix’s “Voodoo Chile” that absolutely blew my mind. Jimi Hendrix still remains my favorite musical artist of all time, however Randolph definitely inspired a sense of awe that I felt when I first heard Hendrix. Randolph leads “The Family Band” and together they play a powerful combination of funk, blues, soul, and gospel music. I couldn’t stop listening to that Voodoo Chile mp3 for weeks and the other songs remained in my rotation for a long, long time.

I’ve never been able to see him in concert, however. Every time he’s been through the DC area, I’ve always had something else going on and been unable to see him. The thing that bothers me the most is that I don’t remember what else I had to do, but I definitely would have remembered seeing Robert Randolph in concert. So when I was offered photo pass and a chance to write a concert review of Robert Randolph’s October 29th show at the 9:30 Club, I jumped at the chance to go.

END_OF_DOCUMENT_TOKEN_TO_BE_REPLACED 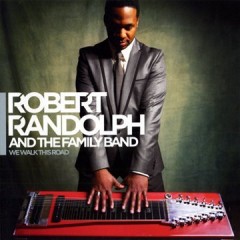 Pedal steel guitar master Robert Randolph and The Family Band is coming to town for two shows on Friday and Saturday night at 9:30 club. Ranked by Rolling Stone as one of the 100 Greatest Guitarists of all time, Randolph is touring to promote his latest studio album, “We Walk This Road”. “WWTR” mainly consists of original music but also features covers of songs by Prince, John Lennon and Bob Dylan.

Citing Stevie Ray Vaughan, Sly and the Family Stone and Earth, Wind and Fire as main influences, Randolph brings an eclectic mix of funk, blues, soul and gospel to the table. Known for lively concerts that are full of crowd interaction, Robert Randolph promises to put on an amazing show. If you’re an electric guitar fan, this is a concert you won’t want to miss. Another cool one to give away this week! Enter to win a pair of tickets to catch the master of Sacred Steel soul himself, Robert Randolph and his Family Band at 9:30 Club on Friday October, 29th!

In case you didn’t know it, Sacred Steel is what the Pentecostal Church music circuit calls the pedal steel guitar. My recommendation to the winner is to snag a spot near the front of one of the balconies to watch Randolph’s fingers flying all over that thing. He is one of Rolling Stone’s 100 Greatest Guitarists of All Time after all. Oh yeah, did I mention Randolph and The Family Band have one of the toe-tapping-est sounds around? Just check out the tunes on their Myspace page and try to resist their funky soul sound.

For your chance to win these tickets simply leave a comment on this post using a valid email address between 9am and 4pm today. One entry per email address, please. Tickets for this show are also available through Ticketfly If today doesn’t turn out to be your lucky day, check back here each Wednesday for a chance to win tickets to other great concerts.

For the rules of this giveaway…
END_OF_DOCUMENT_TOKEN_TO_BE_REPLACED