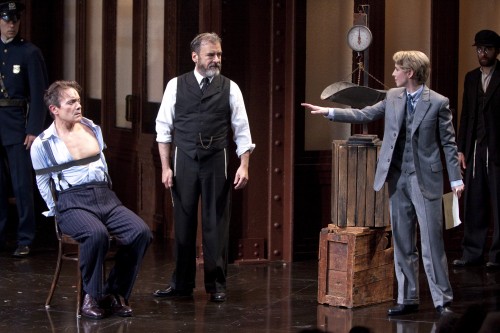 One of the chief joys of director Ethan McSweeny’s sprawling production now playing at the Shakespeare Theatre Company is the restoration of Antonio as the merchant of Venice. Derek Smith’s economical portrayal, containing the character’s melancholy and self-loathing within the cool veneer of commerce and charisma, is revelatory. And it’s made possible in large part by the risk of placing the action in a Venice that resembles 1920’s New York City, so that the merchants sip espresso after espresso like Little Italy denizens and the Rialto Bridge becomes a magnificent staircase suggesting a subway overpass.