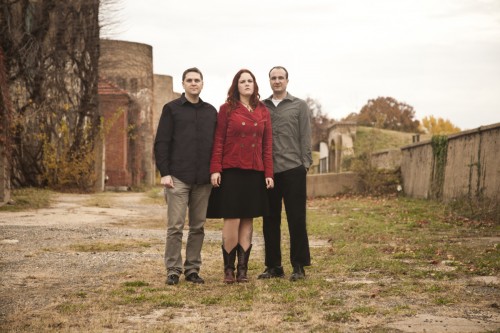 Silo Halo are a DC-based trio that combines guitar, bass, keys and male and female vocals into a dark shoegaze-indie-dream-fuzz sound. Christin Durham(bass, vox), Christopher Goett (guitar, vox) and Greg Svitil (guitar, keys, vox) have all been players in the DC music scene for years (in bands including The Antiques, Girl Loves Distortion, Victor Victoria, Soft Complex, The Parlor Scouts…) but came to play together in 2010, first under the name Night and the City, and in 2011 as Silo Halo. They released their first album this year, titled Night and the City, on Etxe Records, an independent label founded by Goett. Full disclosure- I first met Greg when I joined the band Soft Complex in 2004, and have remained friends with him since then. I’ve always been in awe of his musicianship, creativity, kindness, and general awesomeness as a human being. I’ve been lucky enough to get to know Christin and Chris through Greg in the past year, and one thing that really impressed me about the trio is their dedication to contributing to the creative community in the DC area, not just with their own music, but with tireless enthusiasm and support of others. You can see Silo Halo play Black Cat tonight along with The Mean Season and Golden Looks!

Alexia: How did Silo Halo come together as a band?

Christin: I asked Greg if The Antiques would like to play in my basement when I lived in Arlington. I was playing in a queer-centric 80s cover band at the time, and we would practice and play parties down there, so I eventually decided to put on more formal shows, calling the venue The Basement Speakeasy. That first show with The Antiques and Screen Vinyl Image was December 2008, and it ended up being The Antiques last show. Greg asked if I’d like to collaborate with him for a new project not long after that.

Greg: I saw Christin’s band Victor Victoria and was energized by hearing her sing and play bass, which suited what I had in mind as far as forming a band in which I wouldn’t be the main singer and songwriter.  At the same time I was connecting a lot with Chris, but his band Girl Loves Distortion was still pretty active, and so it was a few months before we could bring him in to write, play, and sing.

Chris: Greg and I met via a regular community potluck of musicians, independent music label types, and recordists.  We connected on several levels musically and personally.  As The Antiques reached antiquity, I became aware of the new musical project. Christin and I met at We Fought The Big One, and that was another strong and instant connection.

Alexia: What song or artist first made you fall in love with rock music?

Greg:  There’s a clear moment when rock n roll gripped me, which happened when I was ten years old, sitting two feet in front of the TV.  The Ronettes came on, singing “Be My Baby.”  Years later, I learned that the clip I saw was from Shindig in 1965.  Their time and place was mysterious to me.  At ten years old, I couldn’t place where or when they came from, and the music didn’t sound like anything I’d ever heard before.  It still doesn’t.  The sound was just enormous.  I was mesmerized by their voices and how they looked and how they moved.  A few months later, I discovered that my older sister had a tape of the song- it was the Dirty Dancing soundtrack- and I thought that she must be the coolest person on earth to have the capability to cue up the Ronettes at the drop of a hat.  During my teenage years, the whole Ronettes catalog became some of the most important music in the world to me, and as an adult, it still is.

Christin: Speaking of The Ronettes, one of the songs Greg saw Victor Victoria perform was “Take Me Home Tonight” by Eddie Money, so seeing me sing Ronnie’s parts probably solidified his notion to ask me to make music with him, or at least that’s the theory I like, haha.  A friend at the Christian school I attended for grades K through 3 played me “Crazy For You” by Madonna on her walkman.  I’ve loved the devil’s music ever since.  My older sister got me into bands like The Cure and REM at an early age.

Chris: I would have to credit my older sisters with my musical tastes and exposure as well.  I have vivid recollection of my sisters and their friends sitting around and spinning their vinyl, socializing and discussing music.  Most of this would now be classified as “first wave” music.  However, the first really transformative musical experience for me was seeing Public Enemy play to a stadium full of people in 1992.  The visual imagery, the ferocity, the command of the crowd, and the message were amazing and changed how I thought about recorded music.  I’ve been an avid concert goer ever since.

Chris: My loved ones, friends, and neighborhood.  Ordinary folks doing extraordinary things in their own way, on their own scale.

Greg: People’s lives, whether they’re those who I know, or those who I see on screen or hear or read about.

Christin: I’m a highly empathetic and emotional person, so I’m easily moved and inspired.  Like most people, it’s easier for me to say what I don’t like and what doesn’t inspire me: indie brodeo, reality television, money, career, capitalism, suburbia, shopping malls…