“Fuse Ensemble” – all photos by author.

With the 2010 Sonic Circuits Festival of Experimental Music and Beyond quietly raging across our region this week, I felt compelled to sample at least one of their outsider music showcases. On Sunday, I found myself in the Old Town Hall of Fairfax, a brilliantly restored old building, watching a variety of acts representing the wide range of styles Sonic Circuits covers. Sunday’s Music Marathon Overload! featured about 15 bands for $15 and ran from 11am to 11pm – a mind-melting 12-hour block of experimental music that only those of the strongest constitution could really survive. In the interest of mental self-preservation, I decided to partake of the second half of the Overload and sat in on the evening’s programming. It was an evening full of inspiring music made by people, toys, and furniture-come-to-life that I won’t soon forget.

END_OF_DOCUMENT_TOKEN_TO_BE_REPLACED 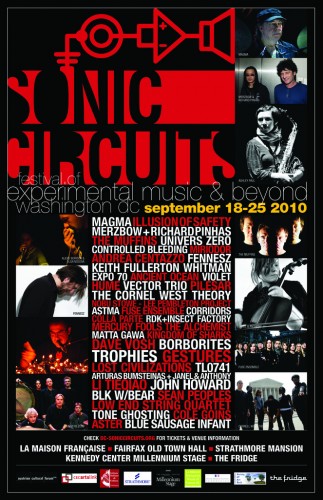 END_OF_DOCUMENT_TOKEN_TO_BE_REPLACED

Gradually, over the last decade, Washington DC has evolved into one of the foremost cities in the world when it comes to experimental, avant-garde, noise, and improvisational music. There is a thriving underground of DC-based noise and improv acts boiling just under the surface of our fair city. Every year this scene is in the spotlight for one week when they invite fellow noise-mongers and sound-scape artists from around the world to come to DC and jam with them. This wonderfully creative week of far-out sounds is called the Sonic Circuits Festival. This year marks the 10th anniversary for the Sonic Circuits Festival and they need some financial support to finalize their plans for this year’s ambitious schedule. With a little help they will be bringing in musicians from as far away as Ukraine, Japan, and France. If you can spare a few (tax-deductible) dollars to help this unique, home-grown scene plan their festival, please pledge. END_OF_DOCUMENT_TOKEN_TO_BE_REPLACED