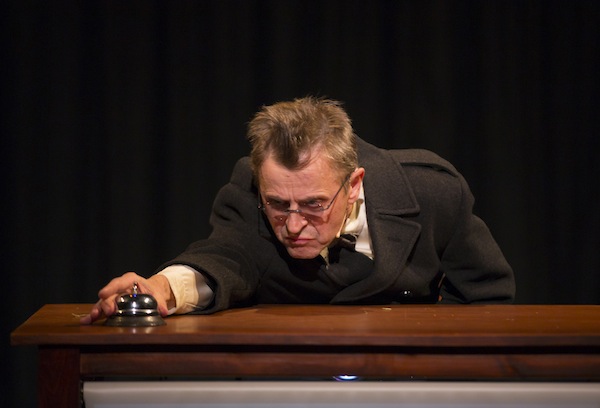 It would be easy for Mikhail Baryshnikov to rest on his laurels. It would also be easy to recommend that you see him in Man in a Case, at Shakespeare Theatre Company as part of their Presentation Series, simply for the novelty of seeing one of the greatest performers of our time on stage. Doing anything. What a pleasure then, that this is not an easy piece. Instead, you have the privilege of witnessing charisma at the service of experimental theater. It’s truly extraordinary.

Man in a Case is adapted and directed by Annie-B Parson and Paul Lazar of Big Dance Theater, who use their innovative approach on two short stories by Anton Chekhov: “Man in a Case” and “About Love.” Parson also choreographs the production (she’s worked with David Byrne on several projects, and with St. Vincent on her upcoming tour). Though it runs just under ninety minutes, the piece has an elegiac pace which allows the seamless combination of video, sound, dance, and narration to unfold with a hypnotic beauty.

There’s a haunting immediacy to the production from its first moments, as hunters begin swapping stories in a manner evoking the folksy banter of a late night radio show. The onstage presence of sound designer Tei Blow and associate video designer Keith Skretch seems entirely natural as they execute cues from their laptops right alongside the actors. It’s that dichotomy between the natural and the artificial that gives Man in a Case an eccentric edge, which only expands as projections reminiscent of surveillance cameras appear on surfaces both expected and unexpected. It has the quality of immersive theater – even though we are watching from our stationary seats in the Lansburgh, we feel included. There’s a hint of voyeurism which expands and continues to the end.

Man in a Case begins with the story of professor Belikov (Baryshnikov), who lives a heartbreakingly restrictive and proper existence almost devoid of air to breathe. END_OF_DOCUMENT_TOKEN_TO_BE_REPLACED