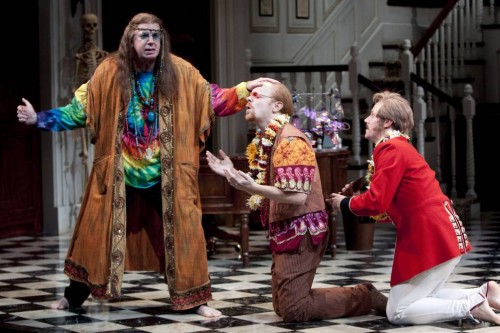 David Manis as Subtle, Jeff Biehl as Abel Drugger and Michael Milligan as Face
in the Shakespeare Theatre Company’s production of Ben Jonson’s The Alchemist, directed by Michael Kahn.
Photo by Scott Suchman.

I can’t speak for any other reviewer, but for me the most enjoyable reviews to write are the ones where I really enjoyed a production but still have some minor quibbles. A little Monday-morning quarterbacking is fun for everyone if you don’t take it too seriously and aren’t a jerk about it. Perfect productions are less fun because there’s less to say about them. Quality theater involves a very subtle energy that’s difficult – if not impossible – to convey to a reader. Bad theater is less fun still because you have to be a special flavor of jerk to enjoy smack-talking someone’s baby, and a lot of people put a lot of energy into putting something on stage.

The least enjoyable kind of theater to write about is the kind that’s always puzzling to see, considering how many people come to it with so much passion: the simply okay, unengaging and largely forgettable production.

Care to guess where The Alchemist fits into this?

END_OF_DOCUMENT_TOKEN_TO_BE_REPLACED END_OF_DOCUMENT_TOKEN_TO_BE_REPLACED

As Dave Barry would say, I Am Not Making This Up. END_OF_DOCUMENT_TOKEN_TO_BE_REPLACED